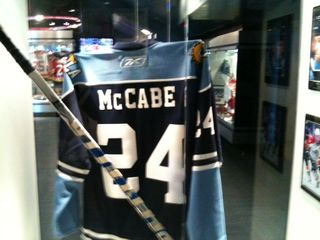 With the Panthers trading veterans Cory Stillman and Bryan McCabe in the past few days – with a good many more trades likely coming on Monday – coach Pete DeBoer was asked about his team's general mood.

“What would you guess,'' DeBoer asked sarcastically. “We're professional and battled through. But it's not easy days when you see guys walking out who you know can help you win games.''

The Panthers may have let the trade rumors affect their play in bad losses to the Islanders and Senators last week, but if some players were worried about Sunday being their last as a member of the Panthers, it didn't really show.

The Devils were just the better team on Sunday. The Devils, who have now won 17 of 21 games to get back in the postseason conversation after being left for dead just weeks ago, took a two-goal lead Sunday and held on for a 2-1 win over the Panthers at BankAtlantic Center.

The Panthers, a team everyone around the league will be watching as the trade deadline approaches Monday at 3 p.m., have lost 14 of 19.

“We kept playing hard, just needed a break at the end,'' said Marty Reasoner, who scored Florida's lone goal late in the third period and could be headed to a contender on Monday. “They play really well when they have the lead. We had opportunities and just didn't cash in.''

Said Mike Weaver: “Everyone says it doesn't bother them, but it affects guys in different ways. But on the ice, you're not thinking about it, you're focused on the game itself.''

The Panthers had numerous chances against Martin Brodeur in the opening period but failed to connect. Darcy Hordichuk, a fourth line grinder, missed a shot in front of the net just moments before he couldn't put a loose puck into an empty net as Brodeur was splayed on the ice.

Brodeur didn't offer up many more such golden opportunities.

After a scoreless first, the Devils opened things up in the second, with David Clarkson and Brian Rolston scoring less than four minutes apart. Rolston's goal came with Weaver in the penalty box and was only the fourth power play goal the Panthers excellent penalty kill has surrendered since Feb. 1.

Florida cut into the lead when Reasoner one-timed a pass from Michal Repik – one of five American Hockey League players in the Panthers NHL lineup on Sunday – with 4:29 remaining. The Panthers then came fast and hard at Brodeur but couldn't put the equalizer through.

“We did a lot of good things considering,'' DeBoer said. “The guys emptied the tanks and gave us what they had. But it wasn't enough.''

McCabe spent the past two seasons as the Panthers captain and said Sunday morning that he wanted to stay with the Panthers “and be part of the process.''

McCabe said he waived his no-movement clause and accepted Saturday's trade to the Rangers after “it was made very clear over the past few days that I wasn't going to be part of their plan for next season.''

Assistant general manager Mike Santos said the Panthers had not spoken to McCabe regarding any specific role with the team.

“He asked us if we would resign him to a new contract,'' Santos said. “Both Dale Tallon and I both told him that we would look at that in the summer. We just weren't willing to sign him now.''

Said DeBoer: “He's a great pro, a great captain. I couldn't ask for a better guy in the room, as a young coach coming into the league, than him. He bought in from Day 1 and never wavered. He was the first to arrive, last to leave and played through pain.''

-- The Panthers played without a center on Sunday with Reasoner, Stephen Weiss and Bryan Allen serving as alternate captains. DeBoer said he would wait until Monday's deadline before deciding on who Florida's next captain may be.

“We'll see what happens [Monday] and see who is here and what we have,'' he said.

-- Hugh Jessiman made his NHL debut on Sunday, a long time coming for the former first round draft pick. Jessiman, 26, became the final first rounder from the Class of 2003 to play in the NHL. Jessiman, acquired from Chicago earlier this month as part of the Michael Frolik trade, said he's been waiting a long time for Sunday.

“It finally hit me. It was almost the perfect day and would have been had we won,'' he said. “It was just a great experience. It was pretty intense.''

-- Dmitry Kulikov was surprisingly back in the lineup Sunday. Out for the past two weeks with an ankle injury, Kulikov had been skating on his own for three days.