« Payback for Chris Bosh?: Toronto Denies Another Florida Panthers Goal ... Flyers hold on for 4-2 win, First in Sunrise since 2009 | Main | Stephen Weiss: "I'll Stay Here Until My Career Is Over If They'll Let Me" ... Trade Rumors Wearing on Florida Panthers Lifer » 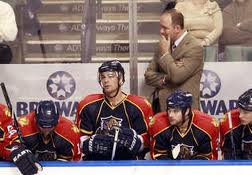 Had good conversations with Pete DeBoer and Stephen Weiss regarding all the trade rumors swirling around.

Weiss is obviously stressed about it, but more on that in a later post.

Here is what Pete had to say about Weiss -- a player he has known since he coached Weiss with the Plymouth Whalers back in the 1990s.

On Weiss playing through pain:

The injuries have affected the numbers. Even last night, he created two or three chances where he got in and just couldn't get enough on it. It's frustrating for him and we need him to produce, but he's dealing with some things that you have to cut him some slack on.

He's not going to complain. He's playing through some things other guys wouldn't. I have no issue with that.

Does that show something to his leadership?

He's been a leader here since Day One. He hasn't looked for a way out of town, hasn't complained about personnel or linemates, what we're spending or not spending. He comes to work and does his job. That's leadership and you have to admire that.

Some scouts have suggested the Panthers need to trade Weiss if only for a 'change of scenery':

I don't buy that 'change of scenery' stuff. You look at the players who have left with the supposed change of scenery since I've been here and you don't see any of them turning into different players than they were when they were here. That goes back to Jokinen and Jay Bouwmeester and Nathan Horton. The change thing, I don't buy it.

Weiss has said he wants to continue to play here, only wants to be a Florida Panther. Does he deserve that?

And you think the franchise is turning that corner?

Yeah, I do. I think we're turning the corner. Our holes are obvious, you see the personnel we need and the game we need to work on. But I think there's a clear plan, a clear direction and the pipeline is filling up with good young players.