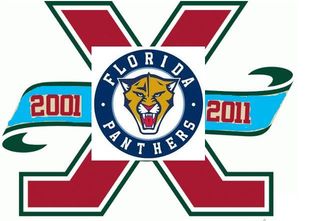 BUFFALO -- It's obvious I'm not too good at the artwork. But, for whipping that together in eight minutes after filing on deadline, not too bad me thinks.

The winner gets two tickets to Florida's season finale on April 9 against the Capitals.

Second place gets four tickets to the game.

Just kidding. Second place gets to let the confetti fly after the game.

Send your photos (and whomever won the Olli Jokinen picture contest in 2008, email me; I have your draft T-shirt from Ottawa) to this address. Good luck and happy Photshopping.

Now onto my story from tonight:

BUFFALO – The Panthers have been on the wrong side of plenty of scores this season, but Friday's 4-2 loss to the Sabres at HSBC Arena was a historical one.

With the loss, Florida was mathematically eliminated from postseason consideration.

Although that's been a foregone conclusion as the Panthers ride out of the string of remaining games, Friday's loss officially assures the Panthers will miss the playoffs for an NHL record 10 consecutive seasons – and by counting the strikeout season of 2004-05, 11 straight years.

Florida had been tied with the California/Cleveland/Minnesota and Colorado/New Jersey franchises in missing the playoffs for nine straight seasons. Florida hasn't been to the playoffs since being swept in the opening round by the Devils in 2000.

“It doesn't hurt anymore,'' said coach Pete DeBoer, in his third year with the team. “We've been hurting for a while. You just get numb to that pain.''

The Sabres are currently holding the eighth and final playoff spot in the Eastern Conference and eliminated the Panthers by winning in regulation. Had the Panthers forced overtime and picked up a point, they would still have had the slimmest of chances. With only seven games left, Florida can get a maximum of 14 points; The Sabres' lead over the Panthers now stands at 15.

Buffalo, which has won three of four, jumped on Florida early with Jason Pominville knocking a loose puck past Tomas Vokoun 1:23 into the game.

The Panthers, who hadn't scored a goal in two-plus games coming in, finally broke that drought as Sergei Samsonov charged in on Ryan Miller and backhanded the puck past Buffalo's All-Star goalie at 4:01 of the period.

Florida put a few more shots on Miller down the stretch, but not enough to do much damage. Drew Stafford scored the go-ahead goal 2:33 into the second period with Jordan Leopold getting the game-winner against his former team as Samsonov served what DeBoer called a “marginal” penalty midway through the third period. The Sabres blew things open when Stafford knocked a rebound past Vokoun 13 seconds later to make it 4-1.

The Panthers offense didn't get much help as David Booth left the game late in the first after being struck in the throat by a puck. Booth was slow to get up and was advised by a Sabres team doctor to go to Buffalo General and get checked out, the worry being whether Booth could fly because of the danger of swelling in his trachea. Booth was released from the hospital soon after the game and planned to meet the team at the airport for the charter flight to Pittsburgh.

“He took a shot in the windpipe and was fine when he left here,'' DeBoer said. “It was all for precautionary measures.''

The Panthers welcomed Weiss back to the lineup after he missed the past two games, but as has been the case lately, every time Florida gets one player healthy, another gets hurt.

This time, it's Jack Skille and Shawn Matthias. The two forwards both missed long stretches with ankle injuries, returning Tuesday in New York. But both said playing in back-to-back games was just too much.

Matthias, who missed two months with a broken ankle, said there was just no way he could play Friday. Skille, who missed a month with a high ankle sprain, says playing Wednesday in Chicago “killed me. It's 10 times worse now.''

With two players out and only Weiss returning, Patrick Rissmiller was recalled from the Panthers AHL affiliate in nearby Rochester, N.Y. Rissmiller was a healthy scratch in New York and had been sent back to the Americans on Wednesday.