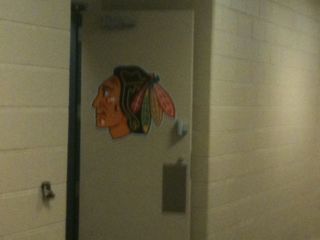 Michael Frolik is the latest of the former Panthers to face their old teammates as he admitted he had trouble finding the visiting locker room at BankAtlantic Center before Chicago's Monday practice. Frolik admitted he was shocked that that Tallon sent him to Chicago on Feb. 4.

“I was just sitting around at home, getting ready for the game the next day and I got the call,'' Frolik said. “That's hockey these days. It happened so quick. I packed and then played in Dallas. It was strange to play for a different team the next day. .-.-. People had talked about me as [part of the] future here. I expected trades, but I didn't expect it to be me.''

Frolik, who recently turned 23, scored 21 goals in each of his first two seasons with the Panthers but had gone 23 straight games without a goal when he was sent to the Blackhawks for Jack Skille and Hugh Jessiman. Frolik's scoring woes continued in Chicago as he didn't score a goal in his first 10 games with the Blackhawks.

He hopes the drought is behind him. Frolik has two goals and two assists in his past three games.

“It was a long stretch and that had never happened to me in my life,'' Frolik said. “When I got here, they told me not to worry about the goals. They had guys who could score them. They told me to play hard and the points would come.''

Frolik is playing on a third line with Jake Dowell and Troy Brouwer  in Chicago after spending most of his time with Florida's top offensive players over the past few years. The Panthers had demoted Frolik in his final weeks with the team, and he admits his confidence was a bit shot by the time he was traded.

“He's really played well, getting better,'' Chicago coach Joel Quenneville said. “It seems like he has the puck a little bit more and is dangerous around the net. That line is dangerous a lot of nights.''

And even though it's taken some time, Frolik says he's starting to fit in with the defending Stanley Cup champs.

“Things are better every day,'' Frolik said. “I'm feeling more and more comfortable. I want to play my best against every team, but it's weird to be back here after playing here not too long ago.''

Tallon, who helped built the Blackhawks into a champion, met with the Chicago media on Monday morning and expressed a desire to move on. Tallon did receive a Stanley Cup championship ring from the team and has his name engraved on the Cup even though he resigned as a senior advisor with the team during the playoffs to take the job in Florida.

Tallon joked Monday that he didn't mind not getting an invitation from the team to visit the White House on Friday, saying "I'm a Republican anyway."

On Sunday night, while watching his Panthers lose to Washington, Tallon said he has completely divorced himself from the Blackhawks organization in a career that spanned four decades. While he says he still watches Chicago games on television, he does so no more than other teams in the league.

“I've cut the cord, had closure and have moved on,'' Tallon said. “I wish them nothing but the best, wish them success. I'm focused on the Panthers and that's all I care about. It will be interesting and different, but there's nothing there for me know. I have to keep the faith and keep working here. It was a great 33-year run there, but the day I drank out of the Cup, that was it for me.''

-- The Panthers put Tim Kennedy through re-entry waivers on Monday and could have the former Sabres' winger in the lineup Tuesday. Kennedy has spent the entire season in the minor leagues because it was feared he wouldn't clear waivers because of his low salary.

With the AHL playoff rosters set on Monday, however, Kennedy is almost assured to pass through and be able to join the Panthers for their final 16 games.

TUESDAY: BLACKHAWKS AT PANTHERS
When, Where: 7:30 p.m.; BankAtlantic Center
TV/Radio: FSNF; WQAM 560
The series: Chicago leads 12-8-3
The game: The two teams are headed in opposite directions. With eight straight wins, the Blackhawks are moving up in the Western Conference and fighting for home-ice advantage once the playoffs start. The Panthers will miss the playoffs for an NHL-record 10th straight season as they have lost 18 of 23 games. The two teams, who haven't played since kicking off the 2009-10 season in Helsinki, Finland, conclude the season series March 23 at United Center. Corey Crawford (26-12-3) starts for Chicago.