« Canadiens Win Home Game on the Road, Beat Florida Panthers 4-0 ... Panthers Within Two Points of 28th | Main | Hockey Night in Miami: College Hockey in Kendall -- The U Versus the F-I-U »

Jacques Martin: Mistakes Were Made in Florida, But No Regrets ... JM the Former GM Praises DeBoer 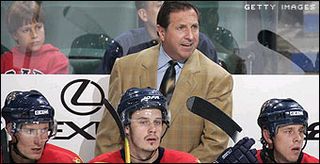 Jacques Martin made himself right at home in South Florida this week. Martin and his Montreal Canadiens spent three days in the sun, wrapping a pair of practices around a dominating 4-0 victory over the Panthers on Thursday.

Martin knows his way around the BankAtlantic Center and the surrounding area. As he should. Martin was hired to coach the Panthers in 2004, became the team's general manager in 2006 and left the franchise in 2009 to take his dream job of coaching the Canadiens.

After Friday's afternoon practice at the Panthers arena, Martin was all smiles as he joked with the media before leaving for Tampa.

Just a few miles to the north in Coral Springs, there were few at the Panthers training facility in such spirits. The Panthers and Canadiens are heading in opposite directions: Montreal is moving up in the standings and trying to improve their playoff seeding. The Panthers, well, aren't. Florida's loss Thursday was its 16th in 21 games and Florida is just seven points away from last place in the entire league.

Martin, who built the Panthers team that has been torn apart, said there were some mistakes under his watch but some hits too. It's all part of the business.

“I have no regrets. You learn with every situation in your life,'' said Martin, who coached the Panthers from 2005 until being relieved of that duty following the 2007-08 season. “I enjoyed my time here, enjoyed working here. There are some great people here. I always enjoy coming back.'' 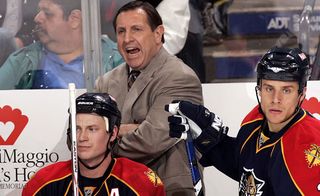 Some of the deals Martin would probably like to a do-over on include signing Rostislav Olesz to a impossible-to-move six-year contract worth $19 million and not trading Jay Bouwmeester at the 2009 deadline. The Panthers were in the middle of the playoff pack at that deadline and Martin kept Bouwmeester for a playoff chase. That fizzled and Bouwmeester walked away – as expected –with the Panthers getting nothing in return.

Martin, the Panthers all-time winningest and longest tenured coach, said he didn't have mixed feelings in watching Dale Tallon tear things apart last month. Of the seven players moved by Tallon by the Feb. 28 trade deadline – including Michael Frolik going to Chicago on Feb. 9 – only Dennis Wideman and Chris Higgins were not acquired or drafted under Martin.

Pete DeBoer was hired by Martin in 2009 and spent one season working under him before Martin left for Quebec. That one season was good by Panthers standards as they finished tied for eighth in the Eastern Conference, losing the tie-breaker to – coincidentally – the Canadiens and missing the playoffs for an eighth straight season.

“That really was a good year for us. We missed the playoffs only because of our record against the Canadiens,'' said Martin, who has won six of eight games against the Panthers as Montreal's coach. “We tried to help the team that year. We should have been in the playoffs with 93 points. It just didn't work out.''

Martin says he believes DeBoer is doing the best he can do under the circumstances. Since DeBoer took over, the only addition Florida has made during a playoff chase was Martin's acquisition of lightly-used defenseman Steve Eminger. Florida has been a seller in DeBoer's past two seasons – leaving him handcuffed as a coach.

“I think Pete has done a good job. He's a really good coach,'' Martin said. “When you look at this team, they're obviously building with youth and that makes it difficult on the coach. But sometimes that's part of being in the NHL. And that's part of the solution. Dale is working under the plan he used in Chicago. Truth is, I think Peter gets the most out of his guys, gets the most out of what he has.''

DeBoer worked a lot harder in his practice Friday than Martin did in his. DeBoer is back to being a teacher, trying to get the most out of a patched-together lineup. This is not the way DeBoer hoped it would be this late in the season.

“We're trying to teach and coach these young guys but still win games as we go,'' DeBoer said. “It's a tough time of year. I enjoy the teaching part of it, but not as much as being in the heat of a playoff battle right now. The way it should work is you teach in September and push buttons down the stretch. That's not the situation we're in.''

-- Injured wingers Evgeny Dadonov and Ryan Carter skated before Thursday's morning skate although DeBoer said they were both out at least until next week. Dadonov suffered a broken finger on Feb. 2 at Montreal and has had his cast removed. He still hasn't been able to handle the puck, however.

Carter, who says he has a problem around his rib cage, hasn't played since Feb. 10 when he was still with Carolina. The Panthers acquired the injured Carter in the Cory Stillman deal last week.

SATURDAY: PANTHERS AT THRASHERS
When, Where: 7 p.m.; Philips Arena, Atlanta
TV/Radio: FSN; WQAM 560
The series: Thrashers lead 36-26-5
The game: Tomas Vokoun will be back in net for the Panthers after being pulled in the opening period of Thursday's 4-0 loss to Montreal. Vokoun gave up two goals on three shots to the Canadiens, but DeBoer said he couldn't really blame his goalie for either. “We just needed a change,'' he said afterward. Florida, which has scored one goal or less in six consecutive games (not counting a team-awarded shootout goal), has lost three straight after beating the host Thrashers 2-1 in a shootout last Friday.