« Welcome Back: Rick DiPietro Gets Win in First Game Back as Islanders Win 4-3 in SO ... Evgeny Dadonov Gets Two in Return | Main | OnFrozenFilm: Adam Reasoner Goes from Wall Street to Madison Square Garden, Fills in for Florida Panthers »

On the Road, Again ... Ryan Carter=The Man ... Sulzer Back, Wilson Down

It wasn't long after the Panthers concluded their longest homestand of the season on Saturday when they were asked about their upcoming road trip.

Things won't come easy for the Panthers as they embark on the final big road trip of the season. The Panthers will leave following practice Monday in Coral Springs and won't return until the wee hours of March 30.

The Panthers will visit a number of teams fighting for playoff position starting Tuesday against the New York Rangers. The road trip will take the Panthers from Broadway to Chicago, back east to Buffalo, through Pittsburgh and conclude in Columbus, Ohio.

For a team that's still trying to get to know one another, being away from home can help bring a group closer together.

“Going on the road with this team is going to be different and I'm looking forward to it. It's good,'' said winger Niclas Bergfors, one of a number of new players Florida has in its lineup since the Feb. 28 trading deadline. “We're working hard, we're getting some chances. We're getting better at telling who the guy next to you is. Every game is tight right now. You have to really pay attention to detail.''

Since the deadline, the Panthers have mostly been at home. Teams bond on the road as instead of heading home after practices in South Florida, the Panthers will be stuck with one another. They'll see each other at breakfast, on the bus, at the rink, back on the bus, at lunch ... just about everywhere.

Even though the Panthers have just 10 games left, center Stephen Weiss figures a lot of the guys on this current team could be back next season. Getting that cohesiveness now will help come training camp in September.

“There were a lot of changes made and it's pretty much a whole new group in here,'' Weiss said. “That's tough at this time of the year. I think we've done a pretty nice job with our systems and picking that stuff quickly. .-.-. We want to play hard and play the right way, get some wins and get some confidence going into the offseason. We have new guys on the team, guys fighting for spots next year. These next 10 games are important to us.''

When Ryan Carter was traded to the Panthers a few days before the trade deadline, Carolina Hurricanes fans bemoaned the loss. “The Panthers are going to love that guy,'' one wrote on a Florida message board.

So far, that's been true.

Carter missed a few games after the trade because of an oblique injury suffered while still with the Hurricanes, but since making his Florida debut on March 12, he's definitely been noticed.

In his first game last week, Carter scored a goal. Then, against the Flyers, Carter was credited with six hits. Against Toronto on Thursday, Carter walloped Mikhail Grabovski then hopped to his skates and fought Keith Aulie.

“I've been around long enough to know that [Toronto GM] Brian Burke teams are going to come after you after a solid hit on one of their skill guys,'' Carter said. “I knew [the fight] was coming. I even started laughing at one point because all I wanted to know was who it was going to be. I knew it was coming. That's OK. That's the way we should play here too. Someone takes a run at our guy, the other team should know we're coming after them.''

Carter led the Panthers, once again, with six hits in Saturday's shootout loss to the Islanders.

“It's a part of the game, a part of the game that I embrace,'' Carter said of his rough-and-tumble style. “You want teams to come in here relaxed, ready to go fishing and hit the beach. Then you hit them in the jaw. That could be an advantage for us.''

Said teammate Dmitry Kulikov: “That guy loves hitting people. It really is fun to watch. He goes to the net, hits guys.''

-- Alexander Sulzer is back for the Panthers on Tuesday vs. the Rangers. Clay Wilson sent to Rochester. 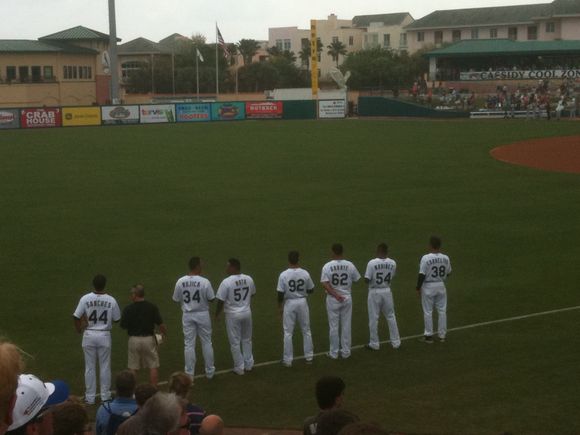