Doug MacLean on Toronto Radio: Panthers Management is "A Joke" 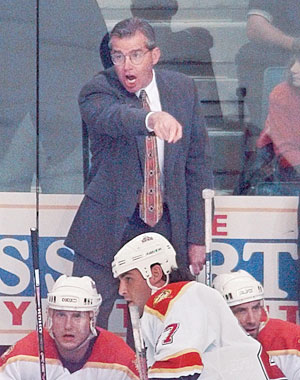 I know this is a few days old, but I just got the chance to listen to Pete DeBoer's interview on Toronto's Sportsnet Radio Fan 590 from Monday. The link will take you to the full interview. Definitely worth the time.

Pete called in and talked to old pal Doug MacLean and co-host Nick Kypreos and Doug sure wasn't using kid gloves when talking about his Panthers.

MacLean, some of you may remember, used to coach the Panthers.

He's still the only coach to win a playoff game -- much less a series -- with the Panthers in franchise history.

That's as painful to write as it is to read.

Anyway, Doug still has a place down here so he follows the travails of the Panthers as much as anyone.

Said Doug on Pete's chances to stick around after the trade deadline: "Good grief. I watched a lot of nights and didn't know any of your players.''

And on Panthers management. (I do not think he's talking about Dale Tallon nor Mike Santos):

"I hear this a lot down there: 'The hockey side has to do the job. We're doing everything we can on the business side.' I say that's complete BS.

"Jacques Martin brought you in and he got out the minute he could, saw a good position and I don't blame him for that.

"Until they fix the whole operation, top to bottom, they have no chance at having any success. I've followed it as close as anyone the past 15 years and it is a joke.''

Pete repeated some of the words he had for us and for Sid Rosenberg on WQAM, saying he agrees with the way Dale Tallon wants to rebuild the franchise.

"We weren't good enough to win,'' DeBoer said regarding the Florida Panthers fire sale at the deadline.

"If they wanted to spend, add to get into the playoffs, it may have happened. We were kind of knocking on the door.

"The reality is, this was a team that may have squeaked into the playoffs and then been done. Dale wants to contend and win championships. Even if we added something, we weren't that team. We knew there would be a lot of long nights over the final 20 nights.''

And on the state of the Panthers during his tenure here:

"Definitely not a lot of stability. I had three different ownership situations, three different GMs. And I don't have a bad word to say about any of them. They treated me first class. But the instability sure didn't help.

"We're a non traditional market down here. Have to win to get people to come. To win, have to spend some money and get some players. It's a vicious cycle.''

Doug then asked how many pieces the Panthers truly have to compete. This was something I spoke with Pete about before he got the ax here. Pete basically told me to look at Pittsburgh minus Sidney and Malkin. The Penguins still have top players. He asked if I saw many of those kind of guys on the Panthers. You don't.

"When I got here, took the job, the sell was we're building around Bouwmeester, Horton, Booth, Weiss that group of guys. Jokinen at the time.

"Now it's a full 360. I think the pieces are from last year's draft, this year's draft. With all due respect to Booth and Weiss, there's just not enough depth to lead you to the Stanley Cup. I think the plan, my understanding of it, the pieces you're talking about leading this team out of the woods are the draft picks. Three first rounders last year, the picks this year. That's a long way off.''

Anyone fired up about next season?