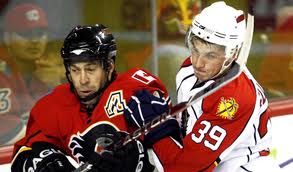 The Panthers signed defenseman Keaton Ellerby to a one-year deal on Wednesday.

The contract includes a one-way clause making it tougher for the Panthers to send Ellerby to the minors next season. Ellerby played in 54 games with the Panthers last season – a career high – but also spent 17 games with Florida's AHL affiliate in Rochester, N.Y.

Ellerby, the tenth overall pick in the 2007 draft, says he is “super excited” about the new contract as he is the first of Florida's eight restricted free agents to sign. Ellerby, 22, is not eligible to become an unrestricted free agent until after the 2015-16 season.

“It's nice to put the AHL in the rear view mirror. This is the year we're going to make the playoffs and I'm excited and appreciative of [GM] Dale Tallon and [assistant GM] Mike Santos for giving me what my agent and I were looking for.''

Ellerby played a much bigger role with the Panthers this season than he did in 2009-10 when he was called up and played sparingly by coach Pete DeBoer. Ellerby's offseason work was praised by DeBoer and his confidence in playing Ellerby showed. Ellerby, who came into training camp 20 pounds heavier than when he left, says he's going to follow the same offseason regimen as he did in 2010.

“I have to come in and earn my ice time, show I'm ready to be a full-time NHLer,'' said Ellerby, who spent most of the year paired with fellow youngster Dmitry Kulikov. “I have to step up, play a bigger role, help the team get where we want to be. .-.-. This contract gives me some stability, confidence in where I'm going to be. It's nice to now you can settle in, do the things the team wants to do.''

Like Jason Garrison before him, Ellerby took a little less money for the security of the one-way deal. Ellerby will make the same $875,000 he made in 2010-11.

“He finally emerged this year and showed he can be a full-time NHL defenseman in the future,'' Santos said. “The way he played in the last half of the season showed some confidence with the puck. It made sense, he can be in our top seven and contribute regularly.''

-- Santos also said goalie Brian Foster, a fifth-round pick in 2005, has been signed to an entry level contract and will join the team at training camp. Foster played for ECHL Cincinnati last season.