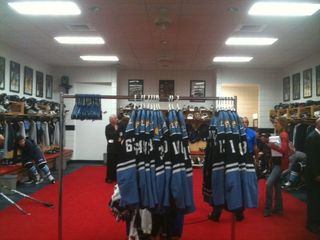 Well, the countdown is really on now.

The Panthers had their final morning skate at The Billboard on Saturday as they will not hold one before the season finale next week against the Capitals.

Monday is expected to be the final practice of the season at IncredibleIce.

Florida now has three games remaining in what has turned into a disaster of a season. Florida was held to two goals again in Saturday's 4-2 loss to the Penguins. If you're looking for silver linings in this miserable cloudy day, well, Florida didn't lose any ground in the Race for 28th.

Of course, they didn't gain any ground either.

Ottawa and the Islanders both lost Saturday. Florida and the Sens are tied for last in the east with the Uniondale Islanders two points up.

Will have a story tomorrow before turning things over to David J. Neal on Monday and Tuesday. I'll be back Wednesday LIVE! from Washington, D.C.

The Panthers haven't scored more than two goals in two weeks, so when they put up that many in a span of just 22 seconds Saturday night, there was hope more were coming. There were not.

Florida never found that elusive third goal on Saturday although the visitors from Pittsburgh did as Zbynek Michalek's goal with 7:11 left proved to be the winner in the Penguins 4-2 win at BankAtlantic Center.

The Panthers have now lost eight straight for the first time since Florida lost 12 consecutive in the aftermath of Hurricane Wilma from Oct. 27-Nov. 23, 2005. The Panthers have also scored two goals or fewer in 16 of their past 21, winning just one of those 16 games.

“Again, you have to score to win in this league. Two is not enough but it's normal our usual output lately,'' coach Pete DeBoer said afterward. “It's frustrating. We had good efforts from a lot of people including the goalie. The combination of not finishing at one end and not getting a timely save at the other is disastrous for us.''

Pittsburgh, which will likely end up the fourth seed in the Eastern Conference playoffs and play Tampa Bay, jumped on the Panthers when Tyler Kennedy scored 1:45 into the game. But Florida bounced back later on as Jack Skille – acquired in February's Michael Frolik deal with Chicago – got his first goal as a member of his new organization with 5:22 left in the first.

Defenseman Clay Wilson answered Skille's goal with one of his own 22 seconds later, giving Florida a 2-1 lead after he beat backup Brent Johnson with a long slap shot.

Unfortunately for the Panthers, that would end the scoring surge.

“The momentum really shifted and it was tough when they scored. They put us on our heels a little bit,'' Wilson said. “You had to figure whoever got the third goal would win and that's what happened.''

Florida had some chances later on, but struggled in the second after Pascal Dupuis tied it 45 seconds in. Michalek's goal put Pittsburgh ahead, but the Panthers put heat on Johnson with David Booth being stopped on a backhanded attempt and Marty Reasoner missing on a power play chance.

The Panthers had a 4-on-3 power play opportunity late in the game, but nothing materialized. DeBoer chose not to pull Scott Clemmensen during the power play to give his team another attacker, but eventually did so with 1:35 left. The Penguins quickly deposited the puck into the empty net five seconds later.

The Panthers sent winger Patrick Rissmiller back to their AHL affiliate in Rochester, N.Y., on Saturday and flew Tim Kennedy to South Florida with the thought he would play against the Penguins. But the Panthers mistakingly did not put Kennedy on re-entry waivers and he was unable to play.

With Rissmiller already gone, the Panthers were a man short of the league-mandated 20-man roster for Saturday. Injured center Shawn Matthias dressed and sat on the bench but did not play. Matthias hasn't skated since re-injuring his ankle March 23 in Chicago.

Stephen Weiss was ruled out for Saturday's game because of a groin injury. Kennedy, in Sunrise on Saturday, will be put on re-entry waivers Sunday and should clear by Tuesday.

“Matthias was the most healthy guy we had, so he's in the lineup,'' assistant general manager Mike Santos said. “Even if we had put Kennedy on waivers on Friday, he wouldn't have cleared until Monday. It's unfortunate. It would have been nice to see Kennedy in another game, but he'll play Wednesday.''

Said DeBoer on playing short handed against one of the top teams in the Eastern Conference: “It's not the perfect situation, but we had to deal with it.''