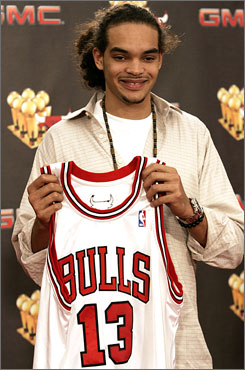 Sunday was not a good night for Bulls center Joakim Noah at AmericanAirlines Arena.

Noah was caught on video using an expletive as well as an anti-gay slur toward a fan after he picked up his second foul early in Sunday's 96-85 loss to the Heat in Game 3 of the Eastern Conference finals.

Noah could face the same large fine Lakers star Kobe Bryant did last month. Bryant used the same slur Noah did and was fined $100,000. Bryant's remarks weren't directed at a fan, but to referee Bennie Adams after being called for a technical foul in a game on April 12.

Noah says he doesn't “even want to think” about the amount of his probable fine.

“It's very disappointing. I apologize if I offended anyone,'' Noah said after throwing the box score into a tub of ice water. “I was just caught in the moment. A fan said something that was disrespectful towards me and I responded. I have to take the consequences like a man. It was just a bad decision on my part.''

Noah, who helped lead the Florida Gators to consecutive national titles in 2006-07, struggled from the start of Sunday's game.

After knocking the ball out of bounds on the initial tip, Chris Bosh drew the first foul of the night as Noah was called just six seconds in. Noah was pulled from the game with 6:26 remaining in the first after he committed his second foul of the night fighting for a rebound. Noah would soon utter the curse word and the slur, reacting to a heckler near the Chicago bench.

“It was a rough night and I just need to bounce back,'' Noah said. “We have to bounce back. We didn't play well offensively or defensively. They just picked us apart. I have to play better, play with more energy and more passion. It was just a frustrating night.''

Noah, who had averaged nine points with 11 rebounds in the opening two games of the series, didn't come back into the game until midway through the second. Noah played just 10:41 in the opening half, scoring one point with three rebounds.

The Bulls big man played much of the third quarter but struggled to do much of anything against Joel Anthony and committed his third foul when Mike Bibby drew a charge. Noah picked up his fifth foul with 3:35 left and the Bulls down 11.

“I never got into a rhythm,'' Noah said. “Even if I'm not in an offensive rhythm I have to bring more. Give Miami credit, they played well. But we can bet better.''

As frustrated as Noah looked for much of the night – Noah ended with one point, five rebounds and six assists in 29:04 – Bibby looked comfortable despite having to cover Derrick Rose for much of the night. Bibby scored a total of nine points in the opening two games of the series and was averaging 3.6 points per game in the postseason.

On Sunday, Bibby had six points in the third after hitting a pair of 3-pointers. Bibby was extremely active in the third, hitting a 25-footer off a feed from Bosh not long after creating a turnover. With the score tied at 53, Bibby calmly drained another 25-footer (this one off a LeBron James pass) with 5:59 left.

Bibby's six points in the third were all he would score.

“He arguably has the toughest fight of anyone and that's getting his chest into the front of that tornado,'' Miami coach Erik Spoelstra said. “He's such a heady player. It's a matter of time when his shooting comes around. We look like a different team when we're knocking down threes.''