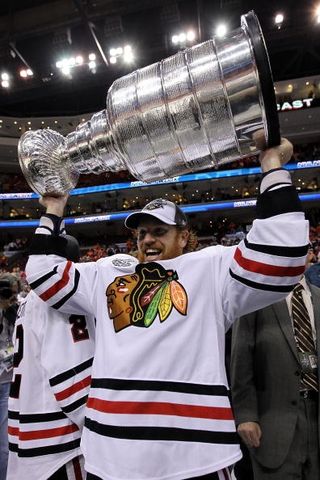 After being asked by the Blackhawks to waive his no-trade agreement, Campbell took a few days to mull things over. It has been reported that he declined to go to the Columbus Blue Jackets.

It's not easy going from a Stanley Cup contender to a team undergoing yet another rebuild.

Yet late Friday night, Campbell gave the Blackhawks the green light to ship him to the Panthers. On Saturday morning, Campbell seemed happy to start fresh with a Florida team all but starting from the ground up.

The Panthers gave up Rostislav Olesz in return for Campbell in a trade that wasn't made official until after midnight Saturday morning.

“I've had a lot of things to think about the past couple of days. I'm happy about it,'' Campbell said. “It wasn't easy to leave Chicago, I enjoyed my time there and my fiancée is from there. But this is an opportunity. Obviously I've talked to Dale Tallon, I know what they're doing there. This is going to be better for my career, going to Florida, playing a bigger role than I was in Chicago. I'm looking for a lot of opportunity.''

Dale Tallon, the Panthers general manager, brought Campbell to Chicago in the summer of 2008. At the time, the Blackhawks were on their way up. They were close, yet not quite there. Chicago finished two spots out of the playoffs in 2007-08. After adding Campbell and others, the Blackhawks quickly turned the corner and advanced to the Western Conference finals.

In 2010, Campbell and the Blackhawks were Stanley Cup champions.

The Panthers hope the addition of Campbell is a kick start to their rebuild. When Florida general manager Dale Tallon was in Chicago, signing Campbell to that eight-year contract worth $57 million signified the Blackhawks' return to respectability, a sign Chicago was ready to compete for the big prize.

“Like in Chicago, he gives us credibility,'' Tallon said. “He had eight teams he could have gone to and we weren't one of those teams. But he did choose us, he made a commitment to come to Florida. That says a lot and means a lot to us to have a player of his stature add us to the list.''

Although many have questioned the large contract Campbell had signed, few question what Campbell brings to the game. A strong skater, Campbell “plays with passion like few I've seen,'' Panthers coach Kevin Dineen said. “He has found a way to be a extraordinary talent. His skating really separates him from the pack. I told him I expect him to be a big piece of the puzzle. He'll be a big part of the puzzle.''

Campbell will make $7.14 million in each of the next five years. That makes him one of the highest paid professional athletes in South Florida, only behind LeBron James, Chris Bosh, Dwyane Wade, Hanley Ramirez, Jake Long and Josh Johnson. Tallon, the guy who gave Campbell all that cash, says he's happy to have him back in the fold.

“He wants to play for the Panthers and that means a heck of a lot to me and our organization,'' Tallon said. “I brought Soupy into Chicago and he's willing to come down and turn this franchise around. That speaks volumes.''

With Tallon at the helm of the Panthers ship, Campbell says more magic is in store. Campbell added that talking with Dineen helped him realize that Florida was a good spot for him.

“[Tallon] did a lot of good things in Chicago,'' Campbell said. “I've already talked to a lot of ex-teammates who have said 'get me there. I want to be there too.' Dale will make this a very attractive place to play. We'll get this organization going in the right direction, get the fans back.''

The signing of Campbell also solidifies Florida's defensive unit as the Panthers now have five defensemen with one-way deals under contract. Campbell is expected to run Florida's top power play unit, one that scored the fewest goals in a full season in franchise history last year.

“There's no doubt we lacked offense from the back line and had nothing coming up immediately. He's also a Stanley Cup champion. The more of those you can put in your room, the better.''