Florida Panthers Make Qualifying Offers to Seven ... Bernier, Bergfors Not Among Them ... Michal Repik Stays, Not RFA Until Next Summer 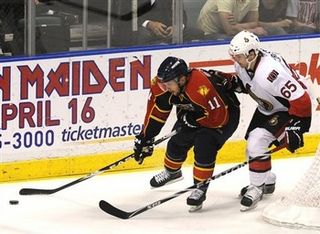 The Panthers made qualifying offers to seven players on Monday.

Those players not offered tenders: Niclas Bergfors and Steve Bernier.

-- Everywhere I have read says that Michal Repik is RFA. He is not.

Mike Santos says he is still on his first entry level contract. According to Santos, Repik will be RFA next summer as his contract slid a year. Bascially, his three-year entry level contract became a four-year contract because of his age and his lack of NHL games in the first season of the contract.

Because Repik only played in five NHL games in 2008-09 (as an 18/19 year old), he doesn't get credit for that first season. Yes, he played in 75 AHL games for the Amerks, but that doesn't count. He would have had to played 10 NHL games for that season to count.