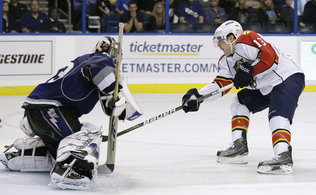 Panthers assistant general manager Mike Santos just told me that he had a real conversation with the agent for Mike Santorelli today for the first time in months.

Santorelli was one of seven restricted free agents to be given a qualifying offer by the Panthers today.

Again, Santos doesn't seem concerned about getting a deal done with Santorelli.

"It could be tomorrow, it could be three weeks,'' Santos said. "It just hasn't been a big priority. He's a restricted free agent. Other things have been going on. We'll get something done.''

Santos, you might recall, was the former assistant GM in Nashville and swung the deal for Santorelli last summer. Turned out pretty well for both as Santorelli had a career year with the Panthers, scoring 22 goals as he played in all 82 games for the Panthers.

In two seasons with the Preds, Santorelli played in a total of 32 games with two goals and an assist.