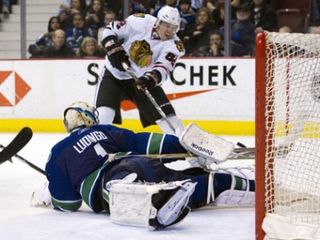 The Panthers deal with Tomas Kopecky is finally official, with the team comfirming the earlier report from Sportsnet's Nick Kypreos saying it's a four-year deal worth $3 million per season.

"I like champions,'' GM Dale Tallon said. "He's from Detroit, had success in Chicago. I like his grit, his personality, his professionalism.''

Tallon confirmed that the team and Kopecky had been talking for a few days as he says Kopecky came up when the Panthers were talking to Chicago about Brian Campbell.

"When we were talking to Chicago about Campbell, we asked if there was anything else,'' Tallon said. "We felt we could sign him because of their cap issues. This was an opportunity to get something done before [July 1st). It was important to us. We wanted some stability going into the first instead of hoping and waiting. It's easier to go forward with him under contract.''

Some are saying the Panthers really overpaid on this deal, but he was going to get anywhere between $2 and $2.5 million per season in my estimation. So it's really not that much more. Especially for a team that has to spend the cash.

Tallon admitted he probably spent too much on Kopecky. And will probably have to continue overpaying as the free agency market opens Friday.

"On Friday, you're going to overpay,'' Tallon said. "July belongs to the players, August belongs to managemt. We want the right pieces in place and he's an important part. We had the room, got a deal done. That's what's important.

"He wanted to come here, that's important. He wants to be a leader. He won in Detroit, won in Chicago. He doesn't want to lose here. He wants to win here.

"His scoring comes because of his work ethic. He's great at tipping shots from the point, he'll pay the price. That appeals to me. He kills penalties. I think he's getting better and better. His numbers go up every year.''

Tallon on Tomas Vokoun: "We're in negotiations with him as we speak, very hopeful. All I can tell you.''

Tallon on what's going on with the Panthers: "I know what needs to be done and we're on the right track. We're dedicated to winning games. Those guys [Campbell and Kopecky] are champions and want to be Panthers. Thats what I want: People who are passionate about being Panthers.''