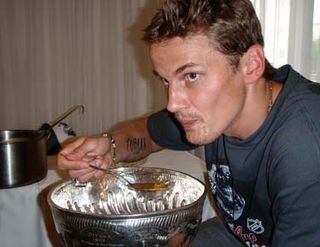 Dale Tallon continues to try and build the Panthers into an eastern version of the Chicago Blackhawks as he acquired the negotiating rights with Chicago forward Tomas Kopecky on Monday.

Florida gave up almost nothing for this, sending a conditional seventh round pick in 2012 to the Blackhawks.

Tallon, speaking on NHL Network on Monday, seemed confident based on trading for Brian Campbell that Kopecky would sign with the Chicago Panthers.

"We got Soupy to come down here,'' Tallon said.

Kopecky is a very versatile forward and is coming off a good season in which he scored a career-high 15 goals. Kopecky has had his best two seasons in Chicago, scoring a total of 25 goals in the past two seasons. He was injured in his next-to-last season with Detroit as he won the Stanley Cup with the Wings although he didn't play a postseason game.

In the 2009-10 playoffs with the Hawks, Kopecky had four goals with two assists in 17 games as he factored into the Blackhawks' title run.

Kopecky made $1.2 million in each of the past two seasons with the Hawks. He's likely wanting something in the $2.2-5 range with the Panthers.

If he doesn't sign by Thursday night, the Panthers lose him to the UFA market.