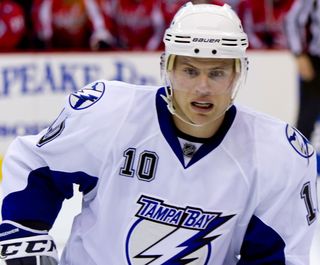 Is one of the biggest days in Florida Panthers history over yet?

Dale Tallon and Mike Santos continue to work deals on the opening day of free agency, signing Tampa Bay forward Sean Bergenheim to a four-year deal worth $2.75 million per season.

Bergenheim becomes the eighth newest member of the Panthers today and 10th since last weekend's draft in St. Paul.

The 27-year-old from Finland had a breakout season with the rival Lightning last season, scoring 14 goals with 15 assists in 80 games. Well, his breakout came in the postseason as he scored NINE goals with two assists as the Bolts came within a win of the Stanley Cup Finals.

“We are very pleased to have signed Sean,” said Tallon. “He is a fast and hard-working forward who recorded a career best 29 points last season and adds further depth to our line-up.”

The Helsinki, Finland native was drafted by the NY Islanders with their first choice (22nd overall) in the 2002 NHL Entry Draft.