Ice hockey is definitely growing in South Florida, with quality youth programs thriving from Kendall to the Palm Beaches.

When the Florida Panthers first arrived on the local scene in 1993, this definitely was not the case. Less than 20 years later, youngsters who started playing the game here have moved on to bigger and better things. In the past two years, three who began playing for the Junior Panthers in Coral Springs as little kids have been drafted by National Hockey League teams.

Although the youth leagues are growing and the high school club programs in Broward are popular, the best players are leaving to find opportunity to reach the highest level elsewhere. Hockey players have become South Florida's newest export.

“It wasn't easy but it was better hockey, better exposure for him to play division I college hockey,'' said Joe Casacci, whose son Nick moved to play hockey at a prep school in Kent, Connecticut, after his sophomore year at St. Thomas Aquinas High.

“It is a very difficult decision. My wife and I evaluated the education – [Kent School] is very prestigious academically – and the athletics are very good. It was very tough. These are the years you don't get back. These are great years, the high school experience. But, it was up to him. At the end of the day, this is what he wanted to do.''

The Panthers host a development camp for their top prospects at their training facility in Coral Springs this week. Looking at the roster, one will find players from the usual hockey hotbeds of Ontario, Michigan, Wisconsin, even Sweden. 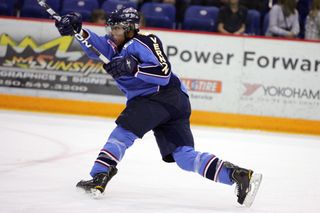 And then there is defenseman Malcolm Lyles.

Lyles grew up in Miami Gardens and would have attended Carol City or American high schools had he stayed in South Florida. “Neither of those schools even have a hockey team,'' he said. Lyles and his brother Milton both played for the Junior Wolves travel hockey team out of Pembroke Pines but left to attend school in the Boston area.

Malcolm Lyles left for Massachusetts when he was 13, rooming with his brother. Malcolm ended up spending two seasons at Boston College after prep school, but left there because of a lack of playing time and development. He moved even further from home, spending last season with the Vernon Vipers of the British Columbia Hockey League. He'll finish his collegiate career at UMass-Lowell.

"Yes, you go against good players and good competition, but you miss so much school. Moving away to boarding school worked out for me and it's paying dividends to this day.'' 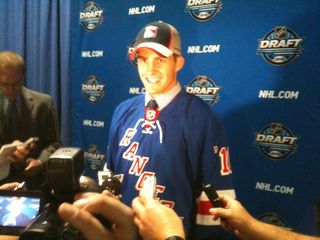 Andrew Yogan became the first Florida born-and-raised player to be drafted by the NHL last summer, taken in the fourth round by the New York Rangers. Yogan moved from South Florida to be noticed by scouts and he was, drafted by the Erie Otters of the Ontario Hockey League. From there, all of his games were watched by NHL scouts.

At last month's draft, 18-year-old Colin Suellentrop was drafted by the Philadelphia Flyers in the fourth round. Suellentrop, from Plantation, started playing hockey at Incredible Ice in Coral Springs, starring for different successful Junior Panthers teams. Suellentrop could have followed his friends to Aquinas, yet left home to follow his dream of being a big-time hockey player.

Suellentrop went to Detroit where he played Tier 1 hockey for the powerhouse Compuware program. Like Yogan, Suellentrop ended up in the OHL. Yogan and Suellentrop may have been the rare Florida kid on a Canadian junior team, but there are more coming.

Nathan Glass, who left Aquinas last year, was recently drafted by the Otters and is draft-eligible next summer. Cody Payne, a former member of the Florida Junior Panthers from Weston, plays for the Oshawa Generals. Goalie Matt Greenfield of Parkland has been drafted by the Kitchener Rangers.

“You are seeing more and more Florida-born players,'' said Scott Luce, the Panthers director of amateur scouting. “It really is a thrill to see all these kids from Florida playing at this level. I may not live in Florida, but I've worked for the Panthers for 10 years now. I love seeing guys from Plantation, Coral Gables on rosters. And I watch those guys. I have a vested interest in them. They grew up as fans of our team.''

Despite the obvious drawbacks of playing hockey in South Florida – lots of travel, lack of ice facilities – Luce says local players do have one big thing going in their favor: Coaching. With so many former NHL players working at local rinks, South Florida players are getting top-end coaching from the very start.

Former Panthers Ray Sheppard, Chris Wells and Peter Worrell are all involved in coaching youth hockey as is current goalie coach Robb Tallas. Craig Anderson, who once played for the Panthers but is now with Ottawa, will host a goalie camp for kids next month in Pembroke Pines.

“These guys are really good athletes, but they are getting quality coaching in Florida during their younger years,'' Luce said. “When they go up to a higher level of competition, they aren't just OK players. These native Floridians are dominating. It's because of the coaching they are getting when they are just starting from NHL guys who are passing that along. The kids in Florida are getting quality coaching, perhaps more so in some traditional markets.''

While Glass and Payne are expected to be drafted next summer, South Florida's biggest splash on the amateur hockey scene could come in 2013 when Gabe Guertler is eligible for the NHL draft. 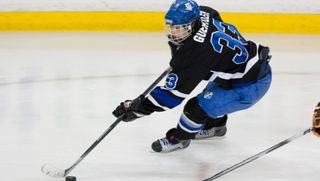 Guertler, who attended American Heritage in Plantation until his freshman year, scored 25 goals in 35 games for Team Illinois at the Tier-1 Midget level. “We have advance notice of him,'' Luce joked.

Guertler was recently the second overall pick in the USHL draft and was named to the U.S. Under-17 Select Team. He'll play in Fargo, N.D., for the USHL's Force next season.

“At first it was tough when I left, but after the first couple of months I saw my parents a few times and I came home a few times so it wasn't that bad,'' Guertler said of leaving home. “Everything about last year was great. Travel hockey helped me out. The competition here was better, but it wasn't a big jump up. We just played a lot more games, better competition each weekend. We only had to fly twice the whole season.''

Blake Geoffrion, Nashville Predators
The grandson of Hall of Famer Bernie 'Boom-Boom' Geoffrion, Blake was born in Plantation and moved to Tennessee when he was 1. He was a second round selection by the Preds in 2006 and made his NHL debut last season.

Sam Gagner, Edmonton Oilers
The son of former NHLer Dave, Sam started playing in Coral Springs when Dave played for the Panthers. Sam honed his game in Canada and was a first round pick by the Oilers in 2007. He made his NHL debut later that year.

Andrew Yogan, New York Rangers
Born and raised in Boca Raton, Yogan took up the game at Glacier Ice in Pompano Beach as a youngster. He moved north at 15 and eventually played for the Windsor Spitfires of the OHL. He made his professional debut last year in the AHL.

Colin Suellentrop, Philadelphia Flyers
A fourth round selection last month, Suellentrop grew up in Plantation and played for the Junior Panthers before moving north to play in the Tier 1 Elite Hockey League for Detroit Compuware.

Brody Sutter, Carolina Hurricanes
A seventh round pick last month, the 19-year-old is the son of former NHLer Duane and played for the Junior Panthers when his dad was with the Panthers in various capacities including director of player development, assistant coach as well as interim head coach. Brody plays in the Western Hockey League.