Florida Panthers Rookie Camp Coming to a Rink Near You. And Soon. 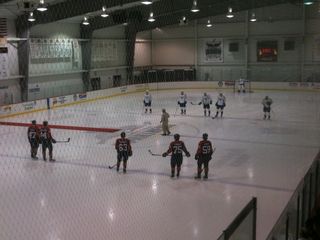 The Panthers are gearing up for a second rookie camp/tournament in Coral Springs next month.

The team will hold a rookie practice on Saturday, Sept. 10, with their first game against the Lightning on Sept. 11 at 6 p.m.

The Lightning will then play the Preds on Sept. 12 -- the Panthers will practice but not play so not to conflict with the Dolphins-Patriots Monday Night Football opener -- with the Panthers playing Nashville on Sept. 13 and the Lightning on the 14th (or vice versa; I'm a little cloudy on the official schedule. But that should be released soon.)

The Panthers had hoped to have four teams at the camp, but there will be just three. The Panthers and Lightning will play twice; Nashville will play Florida and Tampa Bay once each.

Nothing will happen on Sept. 15, with the main training camp physicals happening on the 16th.

The Panthers will officially open training camp in Coral Springs on Saturday, Sept. 17. Yes, that's the day Miami plays host to Ohio State and the Seminoles play host to Oklahoma up in Tallahassee. So it should be a fun day of hockey and football.

-- Word is Mike Santos will be returning to South Florida in the coming days so we should get word on the signing of RFA center Shawn Matthias soon.