Marlins Demote Logan Morrison, Says he "Needs to Work at all Aspects of Being a Major Leaguer" 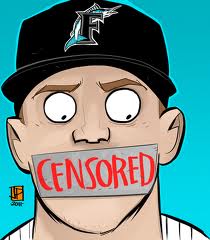 Stanley C. Panther is at today's Marlins-Giants game. I'll be checking out the scene in Coral Springs on Tuesday to see who is out there.

With the exception of reliever Randy Choate and a few others walking around in undershirts that read “LoMo Camp for a Cure,'' there was little evidence of Logan Morrison's presence in the Marlins clubhouse early Sunday morning.

Morrison wasn't the only one posting about the move on Twitter, although he was unusually reserved.

The thank you note was the only post Morrison put up on Sunday. The move sent online social networks into overdrive late Saturday and into Sunday morning with a large number taking Morrison's side on what appears to be a demotion based on various off field issues. On Saturday, Morrison himself alluded to that as the reason he was headed back to the minors.

Morrison apologized on his Twitter account for missing an photo session with season ticket holders prior to the event on Saturday, an absence that Larry Beinfest, the team's president of baseball operations, refused to comment on.

Morrison's Twitter avatar the past few months is a drawing of himself in a Marlins cap with duct tape over his mouth, the word 'censored' in all capital letters.

The 23-year-old converted first baseman was 0-for-3 on Saturday, but had two hits in each of his previous games and was second on the team with 17 homers and third with 60 RBI despite missing time with an injured foot early in the season. Morrison was also third on the team in slugging and fourth in on-base percentage.

Manager Jack McKeon said Morrison can “polish up on on his” fielding in the minors as well as work on holes in his swing. Morrison is batting .249 and McKeon added the demotion could be “a wake up call for everyone.''

“I'm not going to get into the he-said, he-said thing,'' Beinfest said before Sunday's game. “We have what we felt were solid good reasons that will be good for him in sending him down. I'll leave it at that. He just needs to concentrate on playing baseball and working his way back. We thought this was the right thing to do for Logan. .-.-.  [Morrison] will be a good player for a long time. The talent is there. He just needs to work on all aspects of being a major leaguer. He's a much better hitter than he's shown."

McKeon didn't want to talk about the circumstances surrounding Morrison's demotion, saying the Marlins management made the decision. McKeon says he didn't know about the move until being told a change was being made following Saturday's game. McKeon, who himself nicknamed Morrison 'Twitter', said sometimes young players need a breather the minors can provide.

“There's no question he'll be back. He's got good tools,'' McKeon said. “He played hard every time he put on the uniform. I have no complaint with that. .-.-. But sometimes you have to leave the distractions at the door.''

Morrison's willingness to speak out has most definitely caught the attention of team management, with president David Samson saying in May that Morrison needs to be careful in what he posts on the site. Morrison's teammates have obviously noticed the attention he's brought on himself as those players who did speak about the situation on Sunday did so in hushed tones and with choice words.

“The organization thought they needed to do it and they did it. There's nothing else really to say,'' said first baseman Gaby Sanchez. “It happened and that's about it. .-.-. This is a family and what happened is in-house. We all understand it, all know it. You have to choose your words wisely, you can't be blurting things out. These are things the happen in-house. It happened and that's it.''

Shortstop Hanley Ramirez continues to rehabilitate his injured left shoulder at the Marlins' complex in Jupiter with McKeon saying he doesn't know when Ramirez can return to the lineup. Ramirez was injured on Aug. 2 and was put on the 15-day disabled list. He's eligible to come off on Thursday although Beinfest isn't optimistic he'll be ready then.

“I can't tell you. He's over in Jupiter. It's something he's going to have to answer,'' McKeon. “Does the shoulder still bother him? I don't know. I hope the rest does him some good, the therapy is going good, not taking three or four at-bats a night is beneficial. He's hurt that shoulder before. That's his concern. He doesn't want another operation.''