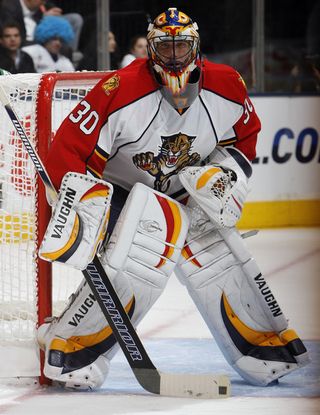 Florida goalie Scott Clemmensen missed practice on Monday after having his knee checked out this weekend.

According to the Panthers, Clemmensen needed to have a 'minor procedure at Doctors Hospital in Miami.

As of yesterday, I heard Clemmensen could miss at least the first few games of the regular season. That was before he had another surgery.

Clemmensen was supposed to start Tuesday against the Dallas Stars but now it looks like Tyler Plante will get that look.

So, with the Panthers going into the season with Clemmensen out, don't be surprised if it is Plante who stays and Jacob Markstrom who heads down to the AHL.

Or, if the Panthers think Clemmensen will miss significant time, they could look around and try and find an experienced backup.

The Panthers really want Markstrom to get a lot of playing time in San Antonio; Plante wouldn't likely see much playing time with the Panthers as Jose Theodore could carry the load until Clemmensen returns.

Clemmensen has had a few surgeries on the knee – he missed two games with a sore knee last year – and reportedly had a procedure on it this offseason.

Will have more, including lineups for the Dallas home preseason finale, later on today.