« Florida Panthers Coming Together ... Jose Theodore to Start vs. Stars on Thursday | Main | Trick or Treat with the Florida Panthers: Kids See Winnipeg Jets for Free on Halloween » 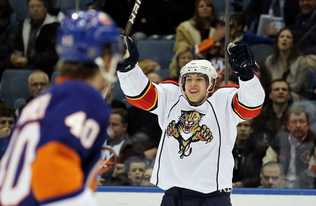 Panthers center Mike Santorelli injured a shoulder in Tuesday's preseason loss to Dallas and will miss the opening few weeks of the season.

Santorelli had a breakout season with the Panthers last season after coming to the team in a trade with Nashville. Santorelli scored a career-high 20 goals after playing in all 82 games for Florida last season.

With Santorelli out, a opening night roster spot just opened up. Matthias, Ryan Carter and Evgeny Dadonov are battling for it as is rookie Jonathan Huberdeau.

The third overall pick of the June 2011 draft, Huberdeau is tied for the team preseason lead with two goals and has enjoyed a strong camp. Florida would need to sign him to an entry level contract by Monday if he was to be able to play for the Panthers this season.

If Huberdeau doesn't sign, he would return to his junior team in Quebec and wouldn't be available to the Panthers except in an emergency call-up or after his junior team is eliminated from postseason play.

“He has done a very good job of showing everything he can at camp to make a statement for his case,'' Dineen said. “He's showing his skill set, his work ethic. He's very respectful of the veterans. He has a real quiet confidence and we think the world of him as a player and a person. The business will take care of itself. He's doing his part. He's a skilled player. You always get excited about a skilled player in your lineup.''