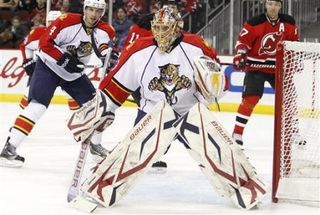 DALLAS – Jacob Markstrom isn't used to backing up anyone. The Panthers rookie goalie has been a starter since taking over for Brynas of the Swedish Elite League at just 18.

Now 21, Markstrom will start this season as Florida's backup to Jose Theodore, although it sounds like this job isn't anything he aspires to. It is, however, a start.

“I'm not going to get anything for free. It's up to me. It hasn't happened yet. It's a good thing to be up here.''

Markstrom didn't start Thursday's exhibition finale at AmericanAirlines Center against the Stars as Theodore got his second start of the preseason.

The Panthers have been grooming Markstrom for the NHL every since they nabbed him with the first pick of the second round in 2008. Only Florida doesn't want to rush Markstrom and didn't want him with the big squad so soon. They would rather he spend more time in the minor leagues honing his skills and getting lots of starts.

Yet with Scott Clemmensen out for a few weeks after having meniscus surgery on his left knee on Monday, the Panthers needed someone else to mind the net.

“It's good news for me, but I have to work hard and continue doing what I do so I can stay around here as long as possible,'' Markstrom said. “For now it's great news. I'm here to play and this is great experience for me. I need to improve my game and show everyone I earned it.''

Coach Kevin Dineen said Markstrom's designation as Florida's 'goalie of the future' didn't play a part in this decision.

"He earned the roster spot,'' Dineen said. "At the end, it was performance based. It wasn't potential based for me. We're not here to sell the future. Guys who perform on the ice are going to earn their way onto the lineup.''

Markstrom beat out Tyler Plante for the job. Plante was placed on waivers on Thursday so he could be assigned to Florida's AHL affiliate in San Antonio. Plante flew with the team to Dallas but will stay behind, joining his new team for Friday's game in nearby Austin.

Plante, the only inactive Florida player on Thursday, definitely hurt his position with a shaky performance against the Stars on Tuesday. Markstrom started the game and handed Plante a 1-0 lead after stopping 10 shots during the first 30-plus minutes. Markstrom promptly gave up two quick goals and Dallas eventually won 4-3 in overtime.

After the game, Plante was seen slumped down in his locker, his head bowed. It was an opportunity to show the Panthers he was ready to make the next step, only that didn't happen. Markstrom made his NHL debut in a relief role against the Devils last season; Plante has yet to play in an NHL game.

“It's just hockey. There was one open spot,'' Plante said. “I couldn't fill the void right now so I have to focus on going down and playing a big role in San Antonio. .-.-. Game to game is always a different story. You can't look at a half game blowing your career. You have to keep pushing forward, working hard.''

As much as Markstrom wants to make the Florida starting job his own, this backup gig probably won't last all that long. Clemmensen's knee surgery was minor in scale, and he's expected back sometime in October. When he comes back, Markstrom will likely be sent down and join Plante in Texas.

Clemmensen was at the Panthers training facility on Thursday, walking around on crutches with a small bandage on his left knee.

“How it happened is still a mystery, but something did and we had to take care of it,'' Clemmensen said. “I went through Friday's practice with no symptoms. Then it swelled up and there was a clicking sound. I knew there was something amiss. I think athletes have come back from this in two, three weeks. Each person and sport is different. Being a goalie is tough on your knees. I don't know the exact time table; three weeks or five to six. We'll take it as it comes.''

No radio, television or streaming.