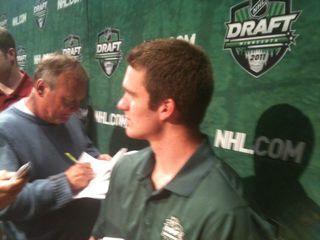 The question isn't whether Jonathan Huberdeau will make the Florida Panthers roster. It's when.

Huberdeau, the third overall pick of the 2011 draft, played in his first game action as a member of the Panthers on Sunday evening.

Yes, it was just a rookie league game against the Lightning. But for Huberdeau, it was nice to put the hectic summer behind him as he begins his long climb toward making the Panthers this season.

“I thought it was pretty good for the first game,'' the 18-year-old said after scoring a goal in Florida's 4-2 win. “I have to prove a lot and have to be better in the next game. This is just the first game and we haven't played together often. I'm looking forward to the next game.''

When Florida drafted Huberdeau in June, the Panthers roster was in a state of flux. The Panthers had less than $20 million committed to the 2011-12 roster, something that was fixed after Florida's spending spree when the free agency market opened.

The Panthers signed a lot of veteran forwards after drafting Huberdeau, making his odds of making it this season a little longer. Florida brass says they are done rushing prospects up to the big club, so Huberdeau needs to be very impressive in the following weeks to make it.

“I think he has a lot more confidence since being at the Hockey Canada tryout this summer,'' said defenseman Erik Gudbranson, the third overall pick by the Panthers in 2010. “He played extremely well there, and he brought that here. He continued the pace he was playing at. He's making a huge difference out there.''

Florida has a number of available options for Huberdeau. If they are able to sign him to an entry level contract, he could make the team and be given a nine-game regular season “tryout.”

If Florida likes what its sees and keeps Huberdeau after that point, his contract would kick in and he would likely stick for the rest of the season. If not, he would be returned to his junior team in the Quebec league for another year of seasoning.

“He's a special player, can play any forward position,'' Panthers general manager Dale Tallon said. “He is unselfish and makes other players better. He's responsible defensively and competes each shift. He never takes one off. And he's a wonderful kid. We're in this for the long haul.''

On Sunday, Florida and the Lightning were tied at 1 in the second period when Huberdeau swept in and beat Jaroslav Janus with a sweet move.

The Panthers would like to see Huberdeau develop physically although it's apparent the skill and the talent is there.

“You can see the play there,'' said Chuck Weber, coach of Florida's AHL affiliate in San Antonio. Weber will coach the Panthers rookies this week. “He's still working on his game, he's learning the pro game. But you see a lot of special talent in that young man.''

Huberdeau was named the first star of Sunday's game with Scott Timmins – who played in 19 games for the Panthers last season before suffering a season-ending concussion – and Gudbranson following suit. Timmins scored the first goal of the night on a rebound from a shot by Alex Petrovic. Florida built its lead to 3-1 in the second when John McFarland picked off a pass at center ice and drove in on Janus and scored shorthanded. Florida's final goal came from Corey Durocher.

“I thought we got off to a great start, really pushed the pace,'' Weber said. “We had a great penalty kill, got a short handed goal and a power play goal. We got goals from all over. It was fantastic.''