On Saturday when word went out that the Canucks made a trade, I immediately thought 'man, the Panthers have done it again.'

Florida's trade of David Booth to the Pacific northwest wasn't its first with the Canucks.

No, these two go way back.

The biggest trade between the two? Take your pick of these: 1999: Florida gets Pavel Bure for Ed Jovanovski. OK, others were involved, but that's the gist of it. he was fired months later.

2010: Panthers trade Keith Ballard to the Canucks for a first round pick and Steve Bernier. Well, the pick was good. Oh, wait, Michael Grabner was also traded here. He hasn't scored for the Islanders yet tonight, but he still 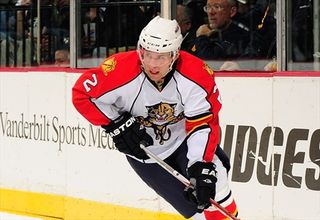 has plenty of time.

2011: Panthers send Chris Higgins to the Canucks at the deadline, get a third round pick in return. The Canucks now have that pick back. If there are any more Vancouver-Florida swaps you all rememeber, send 'em along! -- Panthers GM Dale Tallon has now made three of the deals with the Canucks (Ballard, Higgins and
Booth).

He's always had a soft spot for the Canucks.