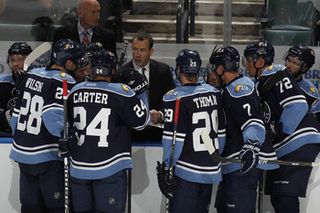 UNIONDALE, N.Y. – It will be natural if Kevin Dineen feels a little nervous before his game on Saturday night.

When the puck drops just after 8 p.m., Dineen officially coaches in his first NHL game. And even though he spent 19 seasons as an NHL player and six more coaching in the minors, there's something special about being behind the bench in the big leagues.

One thing Dineen doesn't have to worry about is getting around the Islanders' arena. In those seasons playing with Hartford, Philadelphia, Ottawa and Carolina, Dineen came to this arena at least twice a year. And it doesn't look much different.

“It has not changed. It's awesome,'' Dineen said after Friday's afternoon practice on Long Island. “It was a great feeling walking across the mall. They're going to have a good opening night here. We're ready.''

When the Panthers hired Dineen to replace Pete DeBoer in May, the Panthers didn't have much as far as players went. The roster had been depleted to the point where Dineen had to take the word of general manager Dale Tallon and alternate governor Bill Torrey that the Panthers were going to make a drastic overhaul.

So when Dineen coaches the Panthers on Saturday, it's a completely different looking team that it was on opening night 2010 in Edmonton. The Panthers have new forwards, new defensemen, new coaches and new goalies.

“Obviously we're all a little bit nervous,'' defenseman Brian Campbell said. “You want to get off to a good start as a player and as a team. It's time to get out there, lay it out there and see what happens.''

Tallon and Torrey both said they were quickly convinced that Dineen was the man they wanted to hire, deciding on it after just one meeting. Dineen was a leader as a player, evidenced by three different teams making him their captain at one time or another.

Dineen played the game hard, hustled for the puck and could end up in the Hall of Fame some day. Dineen ended up playing in 1,188 games, scoring 355 goals with 405 assists.

One thing a number of Panthers veterans have mentioned as being impressed with is the trust that's already been built between Dineen and themselves. Following Thursday's practice in Coral Springs, Dineen gathered a group of eight players together on the ice and spent 10 minutes getting their thoughts on the upcoming road trip.

“He's done things right. It's one of the best training camps I've ever been a part of,'' said defenseman Mike Weaver, starting his second season in Florida. “We're ready for the season. He handles himself well, he's in the locker room and the respect is there. You don't have a lot of coaches who wants feedback. He does. We're taking the next step as a team, as an organization.''

Dineen decided against naming a team captain just yet as he announced that Campbell, Stephen Weiss, Ed Jovanovski and Tomas Kopecky would be Florida's alternate captains for the time being. The Panthers can only have three alternates per game, so everyone but Kopecky will wear the 'A' on Saturday.

There is no timetable for when the Panthers would name a captain. The Panthers went without a captain in DeBoer's first season with Bryan McCabe serving that position from the 2009-10 season until he was traded to the Rangers last February. Whomever is named will become the seventh captain in franchise history.

“I think we have players who are qualified to be leaders on this team,'' Dineen said. “You don't want to just make a decision to make a decision. I have a feeling this group will be together for a long time. I want to see how we react in the face of success and on the other side when you face adversity. We've spent a few weeks together. I want to take our time on this decision.''

Defenseman Erik Gudbranson is expected to make his NHL debut on Saturday with Keaton Ellerby likely the odd d-man out. Florida is carrying seven defensemen right now, and although Dineen said he may dress seven in a game, he's not expected to on Saturday.

Gudbranson was expected to make his debut last season but couldn't come to a contract agreement with the team. He said his family was not making the trip to Long Island but would all be in attendance for Florida's home opener next weekend against the Lightning.

“I am very excited and very fortunate to be here,'' said Gudbranson, the third overall pick in 2010.

“It's exciting for myself and it's great to share this with my parents. No one knows how many hours they spent driving us to rinks and going to games as we grew up. For me to be able to fly them in to see me play in the big leagues is fun for them and great for myself.''