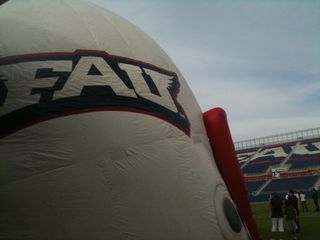 Howard Schnellenberger didn't weld any of the beams at FAU's new on-campus football stadium, nor did he bolt in any of the 30,000 seats.

He didn't even help those workers being paid overtime lay down sod on the day before the stadium opens, nor help finish a parking lot behind the press tower.

Yet the FAU Stadium isn't a reality if not for Schnellenberger.

When students walk into the stadium for Saturday's inaugural game against Western Kentucky around the scheduled 4 p.m. start, they'll do so wearing blue t-shirts that read: “The House that Howard Built.''

It's an obvious take on Babe Ruth and Yankee 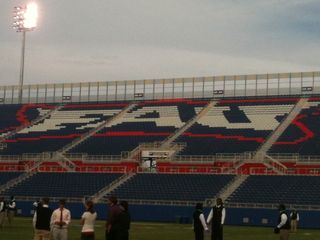 Stadium. In this case, it definitely works.

“The stadium is the essence of being enough for anyone who has been here 'X' number of years,'' Schnellenberger said as ribbon-cutting ceremonies went on behind him on Friday afternoon at FAU's main campus in Boca Raton. “That's for the players, the coaches, the students. Right now, the students are unreal in their love for this place. They think it's really going to do something for their personal lives and their social lives. And it will.''

Schnellenberger has been selling the notion of 'football in paradise' since he first arrived on the scene in 1998 to help get the program off the ground. 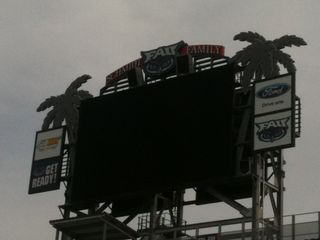 His dream stadium has a Tommy Bahama feel to it as palm trees and beach sand – as well as an eastward-facing press tower for the view of the Atlantic – abound. The large scoreboard features a pair of metal palm trees as well.

Best known as the offensive coordinator of the 1972 perfect season Dolphins and the coach of the 1983 national champion Hurricanes, Schnellenberger has been the only coach FAU has ever known. That changes next year as Schnellenberger retires after this season.

That doesn't mean Schnellenberger is ready to hang 'em up. Before the big ceremony, wife Beverlee as well as other family members gathered in a courtyard in an end zone. Underneath a row of palm trees and towering over that beach sand stood a bronze 7-foot 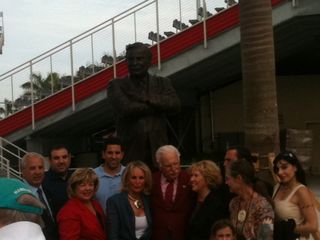 “I thought when the students gave me the t-shirts, that was going to be it. Which would have been more than enough,'' Schnellenberger said. “I think the statue is flattering. That's a 65-year-old version.''

The 77-year-old coach didn't know about the statue and wasn't there for its unveiling as he remained on the field, chastising his field goal kicking unit.
The Owls are 0-5 as they head into their first home game of the year.

It's obvious Schnellenberger is more than ready for the bleeding to stop.

Instead of staying for the many speeches prior to the official ribbon cutting, Schnellenberger gathered his team and loaded them on charter buses for their night in a hotel. Then he followed suit. 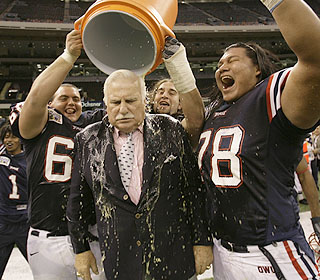 cafeteria to drum up support, Schnellenberger has always put the game first.

“Our football team needs to get back to the hotel and get ready,'' Schnellenberger said. “They are the ones who will play in there, they're the ones who are going to win there. They are going to be the ones to carry us to the next level and set a standard that the whole athletic department will follow and emulate and make this a great, great program.''