Jose Theodore Bringing It ... Keaton Ellerby Ready to Go with Dmitry Kulikov Out ... Mark Cullen Happy to Be Back in the Show ... Cats-Kings on Thursday 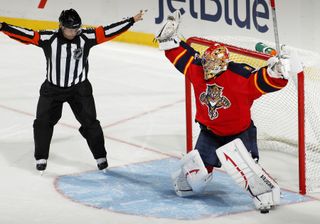 RALEIGH, N.C. – Remember how bad Jose Theodore looked during the Panthers preseason? Seems like a long, long time ago.

Theodore has been terrific for the Panthers this season, and put many questions following a shaky training camp to rest after shutting out the Islanders 2-0 in the season opener.

“We're well beyond how stinky he was in training camp,'' coach Kevin Dineen said. “Part of the advantage he had was he was a veteran and I was able to believe in him. Give him the benefit, believe in the resume that he could go out and do it. Since the beginning of the year, he's given us a chance to win every night.''

Since that night, Theodore has won 10 games with a point in three of his losses. On Tuesday, he gave up one goal as the Panthers won their NHL-tying best seventh road game.

Coming into the season, Florida's goaltending was a question mark as starter Tomas Vokoun left the team and landed in Washington. Theodore was pegged as Vokoun's replacement and has fared well. Going into Wednesday, Theodore has stopped 92 percent of shots faces and is allowing an average of 2.29 goals per game.

Vokoun, whose Capitals trail the Southeast Division leading Panthers by five points, trails Theodore in both save percentage and goals-against. Both have 10 wins this season.

“It is always good to start the season off on the right foot,'' Theodore said. “The team is playing great and I'm feeling good.''

Although Dineen jokes that he was lying a bit when he said he wasn't concerned about Theodore's uneven showing in training camp now, Theodore says he stands by what he said at that time. “You remember,'' he said. “It didn't bother me.''

Now in his 14th NHL season, Theodore said in September that he wasn't worried, that when the lights of the regular season came on, he would be ready.

The Panthers weren't too sure. Before Scott Clemmensen needed knee surgery, there were rumblings that he may open the season on Long Island instead of Theodore. When Clemmensen went down, the Panthers went all in with Theodore. So far, so good.

There's little doubt Theodore enjoys being Florida's top goalie after spending last season as the backup in Minnesota. Theodore was thankful for that opportunity, mind you, after not being signed during the summer of 2010. An injury led to the Wild signing Theodore on the eve of the 2010-11 season opening.

“Last year was still a good experience for me and my career,'' said Theodore, who signed a two-year deal with the Panthers on July 1. “I had to find wins when I played, even though I didn't play every game. Right off the bat when I came here, they told me they wanted me to be the guy. I knew it was a challenge, my job to lose. But you still have to prove yourself every night. It's fun.''

Unlike Minnesota, Theodore had time to come to South Florida and get settled. With some family already living in the Boca Raton area, Theodore knew a little bit about the region and wanted to be here. Theodore isn't the only one comfortable with that arraignment. The Panthers are as well.

FROM SEVEN TO SIX

The Panthers have carried seven defensemen throughout the season with rookie Erik Gudbranson and Keaton Ellerby alternating games. With Dmitry 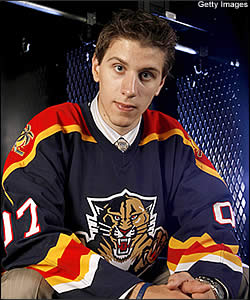 Kulikov out for the foreseeable future after taking a nasty cut to the right leg Tuesday, both Gudbranson and Ellerby are expected to play together when the Panthers visit Los Angeles Thursday night.

“This is just part of the game. Injuries happen so you have to be ready to step in,'' said Ellerby, who has played in 11 of Florida's 24 games this season. “We both have a little experience under our belt right now so we just need to keep working and keep this thing going.''

() Mark Cullen played in his first NHL game since Nov. 9, 2006 on Tuesday and said while he's excited for the opportunity, he knows it can be pulled away at any time. The Panthers are expected to get veteran Mikael Samuelsson in the lineup soon, so Cullen's stay may be short. 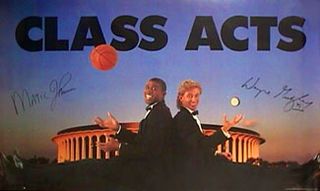 The game: This is Florida's first and only trip to the west coast this season. The Panthers play at San Jose on Saturday before flying home. The Panthers are coming off a 3-1 win in Carolina on Tuesday and have an NHL-leading eight road wins. The Kings, who had lost two straight and three of four before topping the Sharks on Monday, are 7-6-1 at home.