« Welcome Back: Pete DeBoer Returns to Face Panthers on Monday with Devils ... DeBo: No Regrets, Has No Problem with Dale Tallon | Main | Stephen Weiss: No Names, Please ... Panthers Having Fun, Have Strip Shootout ... Rangers in Town Wednesday » 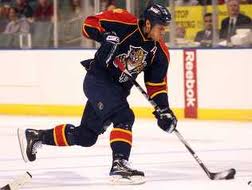 If Pete DeBoer wasn't sold on the new-look Panthers before Monday, he has to be now.

This sure isn't the bunch he used to coach here.

Not only did the Panthers rally from an early three-goal deficit to upend DeBoer's Devils 4-3, they did so with opportunistic goals and a staunch penalty kill.

In years past, the Panthers would have crawled into a hole down 3-0 in the opening period. This team put up a fight and got perhaps their most satisfying win of the season at BankAtlantic Center.

The comeback was historic as well as it was just the second time in history the Panthers won a game once down 3-0. DeBoer was coaching the Panthers the other time it happened against Toronto in 2009.

“These guys don't quit,'' said general manager Dale Tallon, who fired DeBoer the day after last season ended and then remade the Panthers roster over the summer. “They are starting to believe in themselves. With four starters out of the lineup, I'm really impressed with these guys. We have more weapons than we've had in the past, but this was a special win.''

The Devils jumped all over the Panthers, getting three goals within a span of under four minutes in the opening period.

The Panthers went into their locker room during the first break and decided they weren't going out like that.

“We decided it could go one of two ways either we get spanked or fight our way back into it,'' said Stephen Weiss, whose shorthanded goal in the third tied the score at 3. “We're not going to quit. We weren't happy with the way we played in the first but that doesn't mean it was over. We pulled up our pants and changed things around.''

Florida got a pair of goals from Kris Versteeg in the second to go into the second break down just one against Hall of Fame goalie Martin Brodeur. In the third, Florida had a bunch of great chances snuffed out by Brodeur and should have been in a lot of hot water midway through when Tomas Fleischmann and Jack Skille went to the box.

Skating down a man at 4-on-3, Mike Weaver blocked a shot deep in his end and got it out to Jason Garrison who spotted Weiss streaking up the ice. Garrison slid a nice pass through the zone and Weiss charged in on Brodeur, roofing a shot to tie it up.

The Panthers penalty kill then went to work – Weiss stayed in – and killed off an extended penalty.

Fleischmann ended up winning the game with 2:03 left

Tallon dedicated the win to his father Stan; Monday was the third anniversary of his passing.

“This one is for my dad,'' Tallon said, looking at the ground. “Someone was looking out for us up there and I know it was him. I was praying to him during the penalty kill that's for sure.''

Backup goalie Scott Clemmensen missed his second game on Monday with what is thought to be groin issues. Dineen and Clemmensen say the injury isn't serious and he should be back soon. Rookie Jacob Markstrom backed up Theodore for the second straight night.

“My start this season has been stop-and-go and that's been a little frustrating at times,'' Clemmensen said. “I'm very close to coming back again. I want more go in my year, start going and keep on going. I got to get started.''

-- Dineen said Marcel Goc's undisclosed upper body injury, which has already cost him three games, will cost him at least a fourth as will not play Wednesday either.

-- Mikael Samuelsson has yet to play for the Panthers despite being acquired on Oct. 22 in the David Booth trade. Samuelsson, who is having complications from a sports hernia surgery last May, says the road back to the ice is slow but he hopes to be back practicing with the team next week.

“We're taking it really slow but I need that time,'' said Samuelsson, who has been skating on his own the past week. “I had a setback and now I'm using my left side which I hadn't in the past. We're getting there. Give me one more week.''