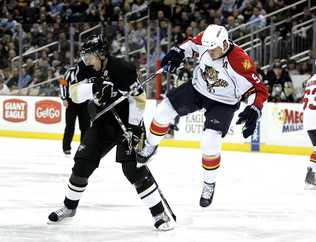 When asked what nickname he would to see given to the Florida Panthers front line, Stephen Weiss – as expected – shrugged.

“No thanks. I don't want one,'' Weiss said. “We just want to keep flying under the radar.''

Yeah, good luck with that.

Weiss and linemates Tomas Fleischmann and Kris Versteeg are off to a red-hot start and have helped fuel the Panthers into a first place start 20 games into the season.

The Panthers top line has had a hand in each of the Panthers seven goals in rousing victories over Pittsburgh and New Jersey.

On  Monday, the Panthers got two of their four goals from Versteeg and the other ones from Weiss and Fleischmann as Florida rallied to beat the Devils 4-3.

“It's been a good stretch,'' Weiss said, “but we're not starting any parties either. We have a lot of work to do as a team and a line to keep this going. We talk about how we need to produce every night, or at least create chances. They're not going to go in every night, but if you are creating things, you increase your chances. They're going in right now, but that won't always be the case.''

At Tuesday's practice, coach Kevin Dineen switched up the Panthers other lines, moving players like Evgenii Dadonov and Tomas Kopecky. There is no moving what has become an untouchable top line. And why would he? The Weiss-Versteeg-Fleischmann line has played together since the first game of the season, one in which Weiss scored Florida's initial goal.

Don't expect them to move around anytime soon.

Of Florida's 59 goals, the top line has 28 – or 47 percent. All three players are ranked in the top 20 in the league in scoring and are the highest-scoring line in the entire NHL. Florida is one of just three teams (San Jose, Chicago) with three players among the league's top 30 individual scoring.

“It's definitely a team effort and we've only played 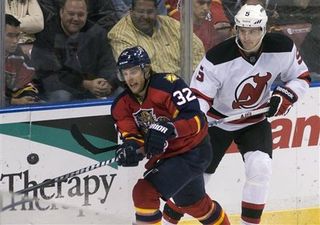 together 20 games. There's still a learning curve there,'' said Versteeg, who went into Tuesday ranked third in the league in scoring with 25 points. “We just out there and have fun playing the game. We don't expect to be front-runners for anything, don't look at the stats. The main thing here is we want to win and want to do it for guys like Weiss who has never done it before.''

The success of the top line equals that to the success of the entire team. The Panthers are off to their best start since 1999, coincidentally the last time the franchise advanced to the Stanley Cup playoffs.
Dineen is pushing the right buttons while toeing a fine line between complacency and keeping a team loose.

Tuesday's practice ended with a play on the end of the classic hockey movie Slap Shot. With the team holding a closed practice at BankAtlantic Center, Dineen held a special shootout contest. Those players who scored were done for the day; those who didn't had to go back in line and remove a piece of clothing or equipment. 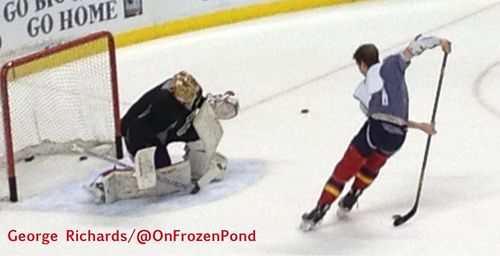 By the time he was done, Shawn Matthias had lost his gloves, jersey and shorts before scoring on Jacob Markstrom. When told the photo of him shooting in limited gear was already circulating on Twitter, Matthias couldn't wait to see it.

“We have a fun group of guys, our coaching staff is fun,'' Matthias said. “We're all just happy to come to the rink. Everyone is close here, we all hang out. It's a close-knit group. Look at us on the bench [Monday] night. We were jumping up and down, hugging just like the fans. It's never been like that here. It's unbelievable.''

-- The NHL said on Tuesday that Matthias wouldn't be fined or suspended for his hit on New Jersey's Anton Volchenkov. Volchenkov took 12 stitches to his mouth and also cut his forehead when his helmet hit the ice.

“I didn't tried to hurt him. You never try that and I hope he's OK,'' Matthias said. “I kept my shoulder down. Maybe because of my size, I may have clipped his face. .-.-. I think it was a clean hit. I asked the ref if it was a clean hit and he said it was.''

-- The first round of All-Star voting has been announced and although the Panthers don't have a player within striking distance of a starting spot, the team is faring better than in past years. 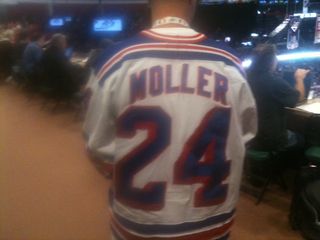 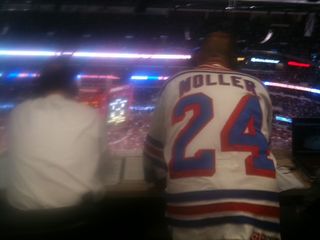 ended with a 4-0 loss to Montreal on Saturday; the Rangers haven't played since. The loss to the Canadiens was New York's first regulation loss since Oct. 27. .-.-. Expect the Rangers to bring back Henrik Lundqvist on Wednesday. Lundqvist is 7-3-3 this season and 12-6-1 lifetime against the Panthers.