Welcome Back: Pete DeBoer Returns to Face Panthers on Monday with Devils ... DeBo: No Regrets, Has No Problem with Dale Tallon Pete DeBoer was in unfamiliar territory on Sunday afternoon, strolling the halls of the BankAtlantic Center as a few members of his team practiced on the ice.

Being at the arena wasn't anything new for DeBoer after spending three seasons coaching the Panthers. Now with the Devils, DeBoer found the visiting side of the building to be a bit strange.

“I have never been over here. I used to meet [Carolina coach] Paul Maurice over in the middle there, the neutral zone,'' DeBoer said. “It's a little 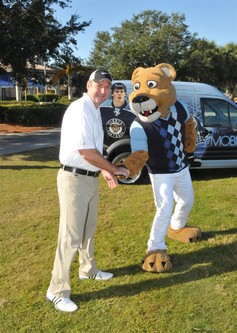 different but it's all good. I'm excited to be back. I looked at the calender to see when we'd be back. I made a lot of friends, met a lot of people in three years.''

DeBoer was back at the Sunrise arena for the first time since being fired by Dale Tallon on April 10. DeBoer will face the Panthers on Monday, telling reporters after Saturday night's win in Tampa “for a lot of reasons, I'd like to win that one.'' It's not just the revenge factor either. DeBoer's Devils are playing very well, going 3-1 on this five game road trip and winning six of eight.

“He has his team playing well,'' said Kevin Dineen, who replaced DeBoer behind the Florida bench. “You move on. Someone as old as I am know it's a tough game to sit there and wish ill will on anyone. Sometimes that's the human reaction, but as far as two points go, I'm sure he wants the wins for the standings instead of just beating the Florida Panthers.'' 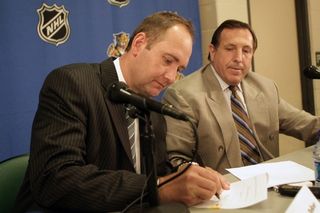 Only a few Devils participated in Sunday's optional practice, DeBoer joking as he often did in Florida that he “took his option” and didn't skate. He instead met with the media and reflected on his time with the Panthers.

DeBoer says he still follows the Panthers and has no regrets in regards to his tenure here. Florida got 93 points in his first year, second most in franchise history, but missed out on the playoffs. The final two years were a mess as the team was in turmoil and flux.

“I'm definitely a better coach, I've learned a lot'' said DeBoer, who won his last game as Panthers coach April 9 against the Capitals and has the second-most wins in franchise history.

“I have no regrets, none. Obviously you don't take a job anticipating three GM changes and three ownership changes in your time, but I don't regret the job I did and wouldn't have changed anything. We poured ourselves into this job and lived it for three years. I left a better coach and really enjoyed my time in South Florida.''

Dineen said he and DeBoer didn't have much of a relationship before this summer when DeBoer approached the new coach of the Panthers to talk.

The two mostly spoke of the youth hockey scene in South Florida as the two both have kids around the same age. DeBoer wanted Dineen to know he wasn't 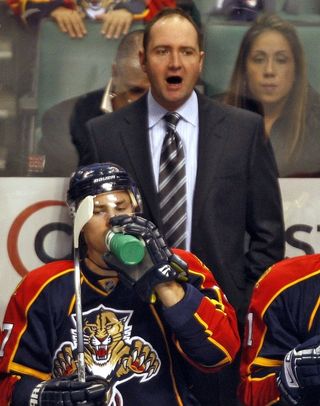 bitter about anything. Dineen appreciated DeBoer reaching out.

A few weeks after the two met, DeBoer got the Devils job.

“We had a great talk,'' Dineen said. “He couldn't have been more gracious to me. He really is a guy I have respect for. It's no fun being on that side of it and we both worked on making something that could have been uncomfortable be not that way at all. We wish him well for a lot of times, just not Monday night.''

Said DeBoer: "I just wanted to touch base with him. Whenever you replace someone there's always that awkward feeling. I just wanted him to know that I wished him luck and that he was getting a good man in Gord Murphy and Robb Tallas. I also wanted him to know how great the support staff is here from Michael Dixon to Justin Copertino.

"We didn't talk a lot about personnel. We did talk minor hockey in South Florida though.''

Monday's game will feature DeBoer coaching against Dineen, but the bigger picture deals with the two clubs. The Panthers go into the game atop the Southeast Division this late in a season for the first time since 2000; the Devils have 21 points and are right in the thick of things.

DeBoer says he is happy the Panthers are having success and seeing “players we had a hand in developing” doing well. DeBoer had praise for the likes of Stephen Weiss, Dmitry Kulikov, Jason Garrison, Shawn Matthias and Keaton Ellerby.

“Stephen Weiss is one of my all-time favorites,'' he said. “The one thing about the coaches we had here in Florida was that we didn't cheat the players on effort in trying to make them better. That was our job.

"We had no regrets on the job we did on the way out. The results just weren't good enough and a decision was made. We were all OK with that.''

As far as Tallon and the Panthers go, DeBoer says he is not bitter and is glad for the opportunity he had with the Panthers.

“Dale has made all the right moves,'' DeBoer said. “This organization is heading in the right direction and he treated me with great respect. I have no issues with him. You can't argue with the success they've had. 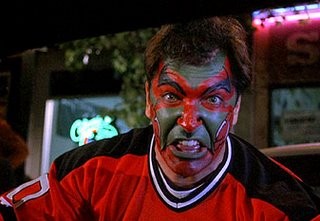 The game: The Devils are in the final game of a five-game road swing in which they've won three of the first four – including Saturday's game in Tampa Bay. The Devils are 10-7-1, a stark contrast to last year as John McLean got the quick hook after a dreadful 5-11-2 start. .-.-. Florida won its third home game of the season Saturday with a thrilling 3-2 decision over the Penguins. Expect Jose Theodore to return after stopping 39 shots against the Pens.