Florida Panthers Get Nothing Going in Boston, Bruins Roll 8-0 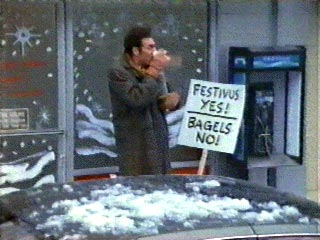 BOSTON – With seven forwards out of the lineup, including top-line center Stephen Weiss, it would have taken a 'Festivus Miracle' for the Panthers to beat the defending Stanley Cup champions on Friday.

Instead, the Bruins flexed their collective muscle during the feats of strength by humiliating the Panthers 8-0 in front of a standing room only crowd at TD Garden.

It's the worst shutout loss in Panthers history, surpassing a 7-0 defeat in Los Angeles on Feb. 3, 2007.

Brad Marchand scored the final goal with 9:07 remaining as he recorded the hat trick. Play was stopped as dozens of hats, visors and black-and-gold Santa caps rained down onto the ice. Florida's worst loss in franchise history was a 12-2 defeat to Washington in 2003.

Since losing to Montreal on Oct. 29, the Bruins are a stout 20-2-1. Those two regulation losses came to Winnipeg and Florida in consecutive games.

“That's an old fashioned butt kicking. There's really nothing to say,'' coach Kevin Dineen said. “I can work though .-.-. I've got nothing. I always try to be a glass-half-full kind of guy but [Friday] there's nothing to say. We were very porous and didn't create any offense. We got our tails handed to us and there's no excuse.''

Boston jumped out to a 4-0 lead before the opening break by scoring two goals in the opening 14 minutes and then two more in the closing 90 seconds of the first period.

The four goals in the opening period is tied for most against the Panthers in one period since the Rangers got four in the second en route to a 6-1 win at Madison Square Garden on Dec. 11.

Jose Theodore, who shut out the Bruins here earlier this month, was pulled after Boston scored four on 14 shots in the opening period.

“It was a frustrating night whether it's 1-0 or 8-0,'' defenseman Ed Jovanovski said. “We've played a lot of road games, and not to make any excuses, but we're a pretty banged up club. These next couple days off will hopefully get us some bodies back. We need to regroup. We have three big games at home.''

Florida, which lost 4-3 in overtime in Ottawa the night before, go into the Christmas break leading the Southeast Division despite going 2-3-3 since beating the Bruins 2-0 on Dec. 8.

Boston even saved playoff MVP Tim Thomas, with backup Tuukka Rask stopping all 30 shots for his seventh win of the year. The Bruins came into the night with the second-highest point total in the Eastern Conference and now have four more (47-43) than Florida.

“It was a tough game, they buried us early on their chances and that killed us,'' defenseman Jason Garrison said. “It's hard to create offense against them when you get down. We made a lot of mental errors and take full blame for it.''

Boston started the onslaught early as Marchant scored on a shorthanded chance 5:56 in by beating Theodore on a shot flung from the slot.

Theodore made 40 saves against the Bruins last time out and was 9-0-1 in his past 10 against the Bruins. On Friday, however, he had no answer for the high-powered Bs. The Panthers were outshot 14-6 in the opening period with the Bruins taking aim 21 times in the first. Scott Clemmensen – who played collegiately at Boston College -- started the second period.

The Panthers had chances to tie it early, but the Bruins made it 2-0 when Milan Lucic took a rebound off the end boards during a power play and put it past Theodore with 6:20 left in the first. Boston then scored twice within a span of 31 seconds as Benoit Pouliot and former Florida defenseman Dennis Seidenberg both put pucks past Theodore.

The beating would continue in the second as Gregory Campbell – who went from Florida to the Bruins in the Nathan Horton deal in 2010 – beat Clemmensen on Boston's 17th shot of the night early in the period.
The Panthers now break for Christmas with the team not getting back on the ice until Monday at 5 p.m.

Florida kicks off a three-game homestand Tuesday against the Maple Leafs. And any thought of the Panthers making some kind of a deal to help out their forward corps is shelved until the NHL-mandated Christmas roster freeze ends Tuesday.

The Panthers played with seven defensemen on Friday after failing to get center Mark Cullen to Boston in time for the game. Cullen, who was expected to play against the Bruins, had travel problems. Florida could have used a extra center with Stephen Weiss out after colliding with Ottawa's Chris Neil and leaving Thursday's game.

() Dineen said Weiss will benefit from having the next couple of days off after missing Friday's game. Weiss, who is said to have a chest injury, is doubtful for Florida's next game on Tuesday against his hometown Maple Leafs.