« Jose Theodore Bringing It ... Keaton Ellerby Ready to Go with Dmitry Kulikov Out ... Mark Cullen Happy to Be Back in the Show ... Cats-Kings on Thursday | Main | Florida Panthers Not 'Quick' Enough to Beat LA Kings ... Jonathan Quick Makes 41 Saves in LA's 2-1 Win ... Kevin Dineen: "We Completely Outplayed Them'' » 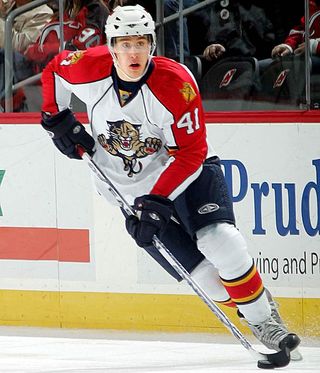 LOS ANGELES – With top-line winger Kris Versteeg out Thursday against the Kings after suffering a broken nose on Tuesday, the Panthers offered an opportunity to step up.

In the past few games, it's been Shawn Matthias answering the call. Matthias scored three of Florida's four goals in its previous two games.

“He's a player who has shown great development to this point and we're really excited about the way he's going,'' coach Kevin Dineen said before Florida's late-night game at Staples Center.

Matthias' statistics over the past two games have been a reward for his hard play on both sides of the ice for much of the season. Even though Matthias hasn't been rewarded with goals – his goal on Saturday in Tampa was his first in seven games – Dineen has been appreciative toward what the big-bodied Matthias brings to the team.

This summer, Matthias was one of the last restricted free agents to sign with the team. The Panthers held firm with a two-way contract, meaning Matthias could be sent to the minors and not be paid NHL money.

With a strong training camp, and intense play ever since, the Panthers haven't even considered sending Matthias to the minors.

Even if they had, with the way he's been playing, he would likely be picked up through the waiver process.
Matthias, who has a two-year deal with the team, doesn't want to go anywhere.

“I'm just working hard, going to the net and moving my feet more. I'm being aggressive,'' said Matthias, whose line of Tomas Kopecky and Sean Bergenheim has been creating numerous chances lately. “Even though I wasn't getting goals, the chances are important. If you're not getting those, you worry. I just keep throwing things at the net because eventually they'll go in. That's what's happening right now.''

Evgenii Dadonov took Versteeg's place on Florida's top line as the trio of Versteeg, Stephen Weiss and Tomas Fleischmann were broken up for the first time this season.

Dadonov came into the game with two goals in his first two games after being called up but nothing in the seven games since.

“You have to be excited if you're the player on that left side,'' Dineen said. “It's a pretty good spot to be in. You would be thrilled to be there. That's a pretty good role to be in. That's the thing you look forward to and look to take advantage of it.'' 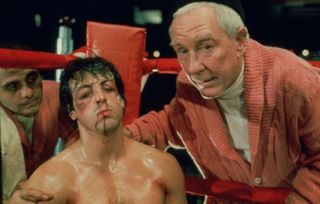 () Dineen and the Panthers weren't happy there were no repercussions for the hit on Versteeg during the opening period of Tuesday's 3-1 win at Carolina after he got smashed in the face by Derek Joslin.

There was no penalty on the play and the NHL decided Wednesday that there would be no suspension nor fine.

“He took a forearm shiver to the nose and it's fractured,'' Dineen said. “He's been having headaches, so for us, it's wise to give him a night off and see where he is Friday. The player in question was challenged [to fight] numerous times and he had no interest. What are you going to do? It sure was nice walking out of there with two points.'' 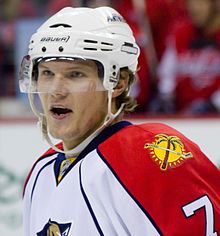 laceration on his right leg suffered when he was clipped by a skate on Tuesday.

Kulikov was stitched up and participated in the team's informal soccer game and took part in warmups before the game.

“I'll tell you, he's one tough kid,'' Dineen said. “He's a guy who has shown us numerous times that his will to play is extremely large. He'll give it a test in warmups and see where he's at. We brought his skates to the hotel and saw where the comfort level was. Our training staff is confident they can keep it where it's in a non-infected way. That's the biggest concern. It's a longer cut that what I originally thought.''

() With Versteeg out, the Panthers recalled 30-year-old center Bracken Kearns from San Antonio. Kearns made his NHL debut with Florida on Oct 20 in Buffalo but was sent to the AHL after the following game.

With Dadonov up on the top line, Kearns became the newest member of the fourth line – dubbed the 'San Antonio Express' – as it has changed in each of the past three games.

“The Panthers have been doing great so I just want to help out. It's a fun team to play for,'' Kearns said. “I've kept tabs on them and have a lot of buddies on this team. It's been great to watch.''

() Mark Cullen played in his first NHL game since Nov. 9, 2006 on Tuesday and said while he's excited for the opportunity, he knows it can be pulled away at any time. The Panthers are expected to get veteran Mikael Samuelsson in the lineup soon – he has been practicing but is still on the IR.