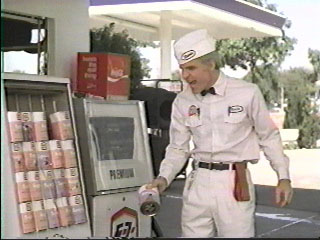 At one point during the Panthers game against the Canucks on Monday, the arena's crack in-house entertainment crew used a clip from the Steve Martin classic 'The Jerk.'

It was the scene where Navin Johnson is being shot at while working at the gas station.

"He hates these cans!" Navin exclaims.

Well, the sniper in the movie had nothing against those cans* of oil.

But someone in the Florida Panthers press box sure did hate those pictures of Boston's Zdeno Charra on the cover of the 2011-12 NHL Official Guide and Record Book. 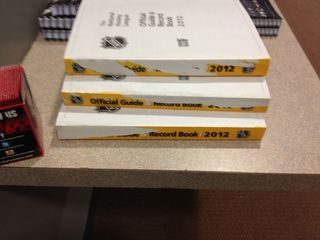 The Canucks were in town. They lost in seven games to the Bruins last year before beating them 4-3 in an emotional and physical game on Saturday.

The Panthers aren't blaming anyone for the defacement of the books but something went down.

Originally there was one torn book in the press box. Sometime before the game, a PR staffer noticed the torn covers. So they were replaced. And torn again. Finally, a few more were brought out but Dale Tallon took one, then a radio guy.

Total books ruined: Three. Guess things could be worse. The Panthers have not said what will come of the books. I hear the Hockey Hall of Fame has called for them. The Boston Bruins have also expressed interest in displaying them. OK, made that paragraph up. 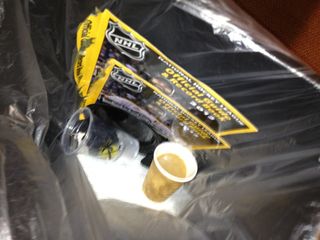 I tweeted (@OnFrozenPond) about this after the game and wasn't planning on writing anything about it. But today, the original tweet was noticed by Eric Wilbur (@GlobeEricWilbur) of the Boston Globe so now it's up and all over the
place.

Our good pal Puck Daddy mentioned it on his site Tuesday.

So I thought I should explain what happened.

Have a great day.