Panthers Brian Campbell Happy to be Back in Ottawa, Share All Star Memories with Family 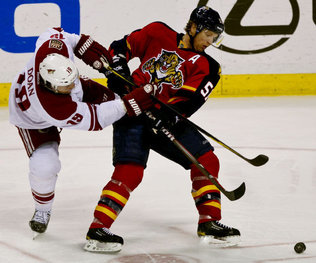 OTTAWA – Brian Campbell wasn't too upset when he learned he wouldn't be going to last year's All-Star game. He had a secondary plan, one that involved a little bit of skiing in Colorado and, well, some other business.

Campbell, playing for the Blackhawks at the time, proposed to his girlfriend Lauren as they vacationed in Aspen. 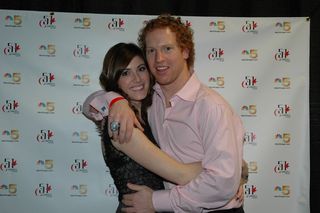 A few months later, he had some more big news for her.

The Blackhawks called and asked Campbell to waive his no-trade clause. After thinking about it, Campbell told the Florida Panthers yes, he would bring his game south. Lauren Miller said yes to the Panthers as well. Sight unseen.

“At first, it was a bit of a shock. I've never lived anywhere but Chicago,'' Miller said Thursday while joining Campbell and his family at All-Star Game festivities.

“It really has been a great experience, a great adventure for us to take together. It's been awesome. And it's been really good for Brian.''

Campbell has played in a number of places over the course of his career, but he got his real start here in Ottawa. Campbell, now 32, grew up in Strathroy, Ontario, about a seven hour drive from the Canadian 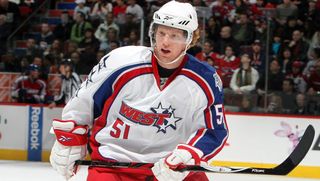 Drafted by the Ottawa 67s of the Ontario junior Hockey League meant many long drives for his family to see him play. Being in Ottawa for this All-Star Game, Campbell's fourth, brought back many memories.

Campbell, former captain of the 67s, dropped the ceremonial puck at their game Friday night.

“He had four real good years here in Ottawa and it was pretty exciting when they won the Memorial Cup,'' Ed Campbell, Brian's father, said. “I remember that very well. It was quite a week.''

Being back in Ottawa has meant a lot of time with friends and family. Campbell's mom Lorna and Ed were in the audience Thursday when Campbell was taken in the 11th round of the fantasy draft – he'll be on Zdeno Chara's team in Sunday's game.

Campbell estimates he will end up buying more than a dozen tickets. His family, he says, has been there every step of the way and has attended all four of his All-Star games. “Tickets aren't cheap,'' Campbell says with a smile.

“We beat him up and showed him the ropes playing street hockey,'' said Craig Campbell, Brian's older brother by six years. “We may have beat him around, you know, he was always the best. He would show us up. He's always had good hands, even as a kid, he had that hockey sense. Watching him and Jason Garrison do what they have done this year has just been amazing.''

Campbell helped lead the 67s to the Memorial Cup in his final season, earning league MVP honors along the way. Being able to enjoy Ottawa in an All-Star type setting, and not having to have his game-face on as he does when he returns to face the Senators, is a nice perk.

“You can go out and relax a little more,'' Campbell said. “There isn't as much prep work, that's for sure, but you want to play well. It's important to yourself and your organization. You always take pride in your game.''

When Campbell was named to the All-Star team earlier this month, he said it the most satisfying selection he had received. The Blackhawks signed him to an eight-year contract in 2008; his average salary of $7.14 million was more than the salary cap strapped Blackhawks wanted to pay.

Florida general manager Dale Tallon was the Blackhawks GM in 2008 and signed Campbell to the big contract. With plenty of money to spend in Florida, Tallon orchestrated a deal that not only brought Campbell – one of Tallon's favorite players – to the Panthers but also rid them of Rostislav Olesz's inflated contract.

Campbell may not fully admit it, but being traded to the Panthers felt like a slight. He wanted to prove to everyone he was still one of the top defensemen in the league and worthy of the contract Tallon gave him.

Through 48 games, Campbell has scored three goals and assisted on 32 others. His 35 points are second most by a defenseman in the entire league and his assists are tied for seventh among all skaters.

Campbell is 13 assists away from tying his career high set in his first season in Chicago.

If the Panthers finally break their NHL record postseason drought, Campbell's play – and leadership – will be a big reason.

“It's been a great situation for me in Florida,'' Campbell said. “This was the best decision for me. It's good to get the chances I am now. I enjoyed my time in Chicago and learned a lot. But that's the past. I've moved forward.''

Campbell started his NHL career not long after that Memorial Cup, debuting with the Sabres on Oct. 2, 1999. Campbell spent eight seasons in Buffalo and is still popular there even though the Sabres traded him to San Jose for the final 20 games of the 2007-08 season. Campbell moved on to the Blackhawks that following offseason.

It was in Chicago where Campbell reached the pinnacle of his profession as the Blackhawks won the Stanley Cup in 2010. It's also where he met his future bride. Campbell and Miller have a June wedding planned back in Chicago.

Not long after the wedding, the two will pack up and head south again. Campbell is signed through 2016 so South Florida is home as well.

“How can you beat stepping outside and it being 80 degrees in January,'' Lauren Miller said with a laugh. “I definitely don't miss the snow in Chicago.''