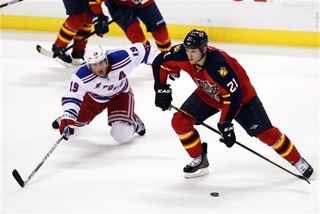 Krys Barch was back at practice on Monday and was playing on Florida's fourth line with Mark Cullen and Bill Thomas.

Scott Norton, Barch's agent, said Sunday that he believes his client will be cleared by the league for what he calls an misunderstanding. Numerous sources from around the Panthers say Barch didn't use a specific racial slur, but what he did say is up for interpretation. Subban is black.

The Panthers expect the matter to be resolved on Tuesday; the league was in no hurry to take care of the matter because of Monday's Winter Classic in Philadelphia and that the Panthers don't play until Thursday.

“This is something we're all very sensitive to,'' coach Kevin Dineen said. “Whenever you're under league review, you respect that process and that's where we are. We needed a good skate, got a good two points the other night. .-.-.

"The Winter Classic is [Monday] and that needs to take center stage. The league will take care of its business [Tuesday]. It's inappropriate for me to make any comments before they make their due diligence.''

-- Barch inadvertently hit teammate Tomas Kopecky to the ice during practice on Monday, with Kopecky staying down while being treated by Florida's medical staff.

After a few minutes on the bench, Kopecky was back working in drills.