Florida Panthers Jacob Markstrom to have Knee Surgery on Wednesday 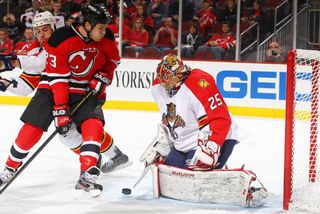 It was only a few weeks ago that the Panthers were losing forwards to the injury list on a nightly basis.

“It's very similar to Clemmensen,'' Dineen said. “That's a good case scenario and obviously when there's damage in there you have options. It's minor surgery and will give him the ability to play again this season. The MRI didn't show what an examination [on the knee] did. That's where we're at.''

Panthers starter Jose Theodore suffered a minor knee injury during Florida's 3-2 win over Montreal when he fell awkwardly after being run over by Mike Blunden and teammate Dmitry Kulikov. Theodore left the game but returned to the ice on Tuesday, skating on his own before Florida's spirited practice at BankAtlantic Center.

The Panthers have the day off, but Dineen said Theodore will work out. Could Theodore be ready to play against Pittsburgh on Friday?

“We'll see where he is on Thursday,'' Dineen said. “He had three save drills [Tuesday] and get in four on Wednesday. Then up to five.''

Markstrom appeared to be in decent spirits on Tuesday although he did have a serious talk with Dineen in the tunnel near the team bench following practice. Wearing a red Panthers sweatshirt and shorts in the locker room, Markstrom said knowing he'll be back this season was a relief. Last February, Markstrom had season ending surgery on the knee.

“You always want to play and we'll see what happens after Wednesday,'' Markstrom said. “You can't look back and be sad. You have to look ahead and come back as soon as possible.

"There was a situation [in practice] where I felt it right away. You never think in your mind that you'll need surgery. It was it is. I'm looking ahead. You have to find the good things. I'll get this done and be back without rushing it.''

-- Forward Tomas Kopecky didn't skate on Tuesday but did workout at the arena. Dineen said it was just a “maintenance day.'' Defenseman Erik Gudbranson dressed with the forwards for the practice.

-- Dineen said there was no update on Scottie Upshall, who traveled to Philadelphia to be seen by a sports hernia specialist. Upshall is skating again after being out since November.

“It has progressed the past few weeks,'' Upshall said after Monday's practice. “I want to be good to go when I come back, be effective and contribute. We need healthy bodies in the lineup.''

-- The Panthers are taking Wednesday off but will return to their training facility in Coral Springs on Thursday morning.

Florida will skate on ice in Miami-Dade County for the first time since leaving Miami Arena in 1998 on Saturday. The Panthers have scheduled a noon workout at Kendall Ice Arena after practicing in Pompano Beach last season and Pembroke Pines back in October.

All Panthers practices are free and open to the public.