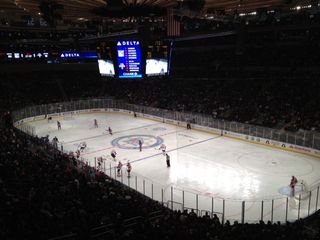 NEW YORK – After being manhandled in their previous two games against the Rangers, the Panthers showed no signs of backing down Thursday at Madison Square Garden.

Florida trailed off a Ryan Callahan goal in the third period yet answered on Mike Santorelli's shot 36 seconds later. That goal, and some stout play in net by Scott Clemmensen, helped the Panthers force overtime and pick up a point in a 3-2 loss.

The Panthers had been outscored 10-2 in their previous two losses to the Rangers including last Friday's 4-1 defeat in Sunrise.

The Rangers got their eighth win in their past nine games when Marian Gaborik's slap shot beat Clemmensen on New York's 41st shot of the night with 1:31 left in overtime.

“We have to find a way to make sure we keep getting points and don't fall back. We have to keep pushing ahead,'' said Stephen Weiss. “It's nice [to be leading the division], it's a place we want to be. But it's a tough stretch here, but an exciting stretch. We're going to find where our team is. For real.'' 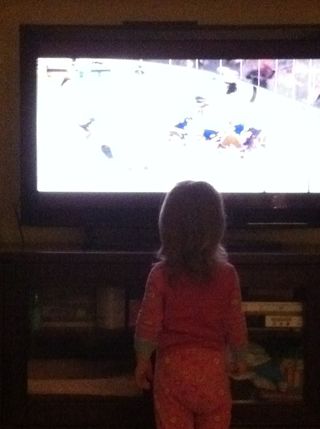 Monday's Winter Classic and with a big game in Pittsburgh on Friday. The Rangers didn't look too enthused to be playing, yet woke up when Marcel Goc snapped a shot past backup goalie Martin Biron to make it 1-0 at 4:16 of the first.

Goc scored on his first shift since being knocked out of Florida's win in Dallas on Nov. 15 with a concussion.

He was assisted by Mikael Samuelsson, who was playing in his first game since being knocked on his behind and suffering a bruised tailbone Dec. 20. Goc hadn't scored since Oct. 29.

“They played well, had plenty of rest time,'' coach Kevin Dineen said. “You could say there's rust, but they came out with some jump and created some things. They were probably our most solid line.''

The Rangers, as expected, bounced back and tied it on Anton Stralman's shot late in the first. Florida got called for its first too-many-men penalty early in the third, with Brad Richards' slap shot hitting Callahan and skipping past Clemmensen for New York's first lead of the night.

The struggling Santorelli picked the Panthers spirits right up, however, as he followed Goc's lead and went high on Giron as well to tie things up with 15 minutes remaining. Santorelli hadn't scored in his past 12 games.

“Nice goal,'' Dineen said. “He played a solid game, played a little wing. When he uses that hard shot, he's pretty effective. It was nice to see him get one. A little confidence could be big for him.''

Clemmensen was terrific for much of the night as he has now put up a pair of strong performances since Dineen yanked him in the second period of last Friday's loss to the Rangers after he surrendered thre goals on 14 shots. Clemmensen came in relief of Jose Theodore last Saturday when Theodore left with a knee injury, stopping 17 of 18 shots in a 3-2 win over Montreal.

“We got a point but you're obviously disappointed when you don't win,'' Clemmensen said. “We're disappointed even though this is a top team and we're playing in their building. We're not satisfied with that. We want to beat everyone every night. This was a tough test for us.''

The Rangers and Panthers traded scoring chances in the overtime period, but the Rangers skated off triumphantly when Derek Stephan left the puck 30 feet out for Gaborik to tee off on. The goal was Gaborik's 23rd this season, tied for second most in the league.

Newly signed center John Madden and suspended forward Krys Barch wore orange jerseys at Thursday's morning skate at Chelsea Piers although neither are injured. Madden, 38, could make his debut with the Panthers Friday against his former team in New Jersey.

On Thursday, Dineen said he wouldn't rule out sending Madden to AHL San Antonio for a game or two of conditioning.

Madden, a three-time Stanley Cup champion who won the title twice with the Devils, hasn't played since April 2 while with Minnesota.