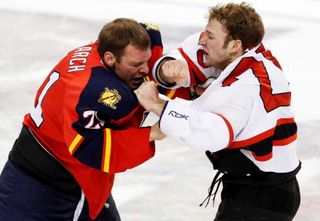 Linesman Darren Gibbs overheard Barch yell something at Montreal's P.K. Subban, who is black, as Subban skated off the ice after a fight with Florida's Erik Gudbranson.

Barch was given a 10 minute misconduct and ejected from the game as an NHL official told The Miami Herald it was for a racial slur.

The NHL held a hearing on the matter Thursday morning. Barch was joined on the conference call by coach Kevin Dineen as well as NHLPA representation.

“I stated my case; I know myself and what I said. It may have been inappropriate but it was nowhere near a racial slur nor that intent,'' Barch said after Florida's morning practice at Chelsea Piers.

“The things I said were pretty explicit and maybe not for kids' ears, so that's why I can't repeat it. My grandma wouldn't want to hear it, lets put it that way.''

Said Dineen: “At the end of it, we respect the decision and move on from here. .-.-. I tell the team, like the other 800 players, coaches and staff in the NHL, how proud we are to be part of the most diverse league in all professional sports. We're extremely proud of that and it's an area that we make sure we are aware that comments can be taken in many different ways. It's important you always conduct yourself in a proper matter.''

Although Barch nor the Panthers will divulge what Barch said, two sources told The Herald that, aside from various expletives, Barch basically asked Subban if he “slipped on a banana peel” after his legs went 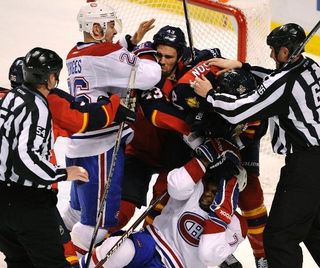 out from under him after being punched by Gudbranson.

“There is no debate over what was said,'' Dineen said. “The content or the context of the comment can and should be debated over what the intent of the comments were. I have a lot of respect for Krys Barch and how he's handled himself the past five days. This has been extremely tough on him.

"At the end of the day, all the information was laid out there. We respect the league's decision and move on.''

Scott Norton, Barch's agent, said last Sunday that Barch meant nothing racial by his comment and said that it was all just a misunderstanding. Barch said he was told by NHL vice president Colin Campbell that if the NHL thought Barch used a racial slur, his suspension would be between five and 10 games.

Barch said he called Subban on Sunday to explain himself. Subban claims he didn't hear anything said and Barch told him. “I'd rather him hear it from me,'' Barch said. Barch also spoke to Montreal's Erik Cole who also heard what was said from the Florida bench.

“What me and my family have been through, the way my dad brought me up,'' an emotional Barch said, “we live in southern Ontario, one of the most mulit-cultural places in North America if not the world. There are so many players in this league representing so many countries, we are very diverse. I would never want to touch people in that way.

“My intent, for my sake and my families sake, I never said anything racially driven or used a slur. I've looked on the internet and there are 700 related articles that say I said I used a racial slur. I have to deal with it, my wife has to deal with it walking the dog down the street, my dad. It's nice that's over with, things came out. I do feel bad for the team. There's been a cloud hanging over us the past few days.''

The Panthers are said to be standing behind Barch and he is not expected to be sanctioned by the team aside from Thursday's suspension.

As one unnamed member of the team said, “he used a bad choice of words, no doubt. But it did look like Subban slipped on something. Barchy is a great guy. He didn't mean what it sounded like that night. We'll put this behind us.''

Added Barch: “I got into this league through hard work and that's how I'm going to leave it. Something like this isn't what I'm about.''

The National Hockey League announced today that Florida Panthers forward Krystofer Barch has been suspended onegame as a result of an inappropriate comment directed at P.K. Subban of the Montreal Canadiens at the end of the first period of Game 559 in Florida, December 31, 2011.

Mr. Barch will miss tonight’s game in New York against the Rangers.

“While we accept Mr. Barch’s assertion, as a player in the National Hockey League, he must be held accountable formaking a comment that, in the context in which it was made, and in light of the entirety of the circumstances, was offensive and unacceptable.”

-- With Barch out, the Panthers will bring back injured forwards Marcel Goc (concussion) and Mikael Samuelsson (bruised tailbone) against the Rangers.

Center John Madden, who signed on Wednesday, practiced but will not play Thursday. Dineen said it's possible that the 38-year-old would be sent to AHL San Antonio to get in a couple of games before he plays for the Panthers.

Madden hasn't played in a game since April 2.