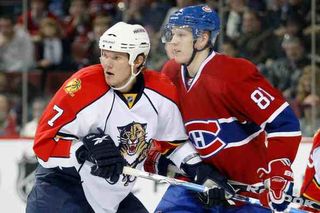 Panthers defenseman Dmitry Kulikov had knee surgery in Coral Gables on Monday and will miss the next six to eight weeks.

Kulikov was injured during Saturday's win against Winnipeg, although he continued to play. Kulikov played eight shifts in the third period, then three in overtime.

“That's obviously a big loss for us,'' Dineen said. “I wish his knee felt as good as his attitude. He's such an enthusiastic young man and has been a big part of what we've done this year. We have some resiliency and we're going to need it.''

Tyson Strachan is in tonight and could be paired with former Blues teammate Mike Weaver.

Strachan says he is glad to be up with the Panthers and didn't think he would have taken this long for Florida to need a d-man from San Antonio.

He also says he and Matt Bradley are cool.

"I really need to get that off YouTube,'' Strachan said with a laugh.