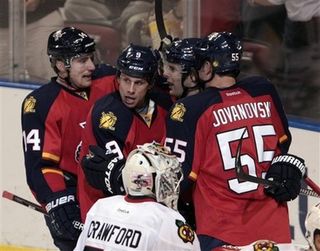 The Panthers top line had been a source of so many goals earlier this season, no one saw the party coming to an end.

Although the trio of Stephen Weiss, Tomas Fleischmann and Kris Versteeg have plenty of time to get things going again, the well of prosperity they once brought has been dry of late.

On Friday night, with the three on the ice as Pittsburgh's Tyler Kennedy walked in on Scott Clemmensen to give the Penguins a 3-0 lead on the opening shot of the third period, coach Kevin Dineen had obviously seen enough.

The trio were split up for the rest of the period, with all three seeing limited minutes in the later stages of the Penguins' 4-1 win at BankAtlantic Center.

Versteeg, one of the big success stories of the Panthers thus far, spent most of the third period on the bench. Versteeg was benched after the Kennedy goal and didn't get back in until there was 7:03 remaining. He played 48 seconds before sitting for the remainder of the night.

“I think that was a pretty strong reflection of my feelings were on his play,'' Dineen said. “That's not a one-game snapshot. I don't just do that on one game. I think it's been a stretch of games where he, in such an important leadership role, needs to play to a higher level of hockey.''

Said Versteeg: “Obviously I want to be out on the ice. When things aren't going, I guess you have to find ways to get guys going. It's been up-and-down lately, but we're still getting chances. I don't know how many posts or empty nets we've missed. If one of those goes in, it changes the whole dynamic, gets the confidence going.''

Versteeg wasn't the only player to see his playing time diminished in the embarrassing loss.

Fleischmann got four shifts for 3:28 and had a great scoring chance in the third period but couldn't connect off a pass from Weiss while in front of the net.

Weiss missed two games last month with a rib injury but he said that hasn't effected his play. Dineen refused to comment on whether he thought Weiss was still battling with the injury.

For Weiss, who hasn't gone this long without a goal since going scoreless in 12 straight during the 2006-07 season, it's obvious this stretch is wearing on him.

The smile Weiss had been carrying around in the first couple of months of the season hasn't been spotted in weeks.

In the first 25 games they played together, the three combined for an average of 1.32 goals and almost two assists per game. In the past 17 games they have averaged less than a goal and assist per night.

“You just keep your head down and keep going,'' Weiss said. “Whatever you want to call it, we heard it loud and clear. We have to be better on both ends of the puck. We need to start chipping in again.''

-- Goalie Jose Theodore and forwards Sean Bergenheim, Jack Skille and Scottie Upshall all took part in the workout although Dineen said it's too early to tell if any of them would be available for Monday's game against the Bruins.

The Panthers will practice Sunday at 10:30 a.m. at Saveology.com Iceplex in Coral Springs. Admission is free.