« Wednesday's Fun with the Twitters | Main | Edmonton Oilers Get Defensive, Florida Panthers Offense is Offensive in 2-1 SO Loss ... Versteeg Stopped at Doorstep in Final Seconds » 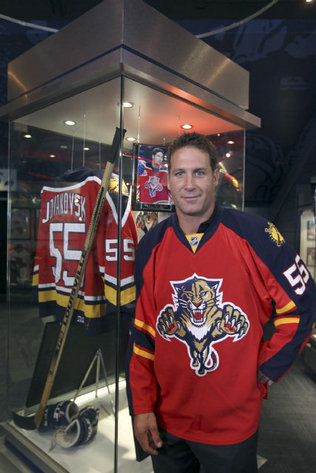 RALEIGH, N.C. – One of Dale Tallon's first targets on July 1, the opening day of the free agency market, was a familiar name to hockey fans in South Florida.

Ed Jovanovski, the five-time All-Star, came back to the Florida Panthers after Tallon offered up a four-year deal worth $16.5 million.

Jovanovski, 35, wouldn't have gotten that kind of money nor that long of a term from anyone else but the Panthers. 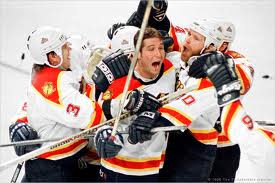 Jovanovski had come full circle. His first NHL contract came from the Panthers after the team made him the first overall pick of the 1994 draft. This is likely his last.

Some hockey pundits criticized Tallon for his wild spending in the first few days of free agency as Tallon remade the Florida roster by signing or trading for 11 NHL veterans and dropping $33 million in payroll for this season alone in the process. Jovanovski's big deal was one of the most scrutinized.

Like most of those contracts Tallon handed out in the first few days of July, the Jovanovski signing has worked out just as he had hoped. Although Jovanovski is a step slower than he was in his prime years on some nights, he is someone coach Kevin Dineen relies on in numerous situations.

Some said Jovanovski came to Florida to retire. It didn't look like that on Wednesday when he took on Carolina's Bryan Allen after the final whistle blew on the Hurricanes' 3-1 win against the Panthers.

“I'm feeling great. The past few weeks have rejuvenated me,'' Jovanovski said. “I have my legs back. I know my role on my team. I have no problem with it.''

To paraphrase country star Toby Keith, Jovanovski may not be “as good as he once was,'' but there are many nights in which he is as “good once as he ever was.''

“He's a big man and he's a tough man. Are there some holes in his game some nights? Yes. But when he comes to play, he comes to play. That's a pretty good veteran presence on that back end.''

Dineen points to the leadership Jovanovski brings to the Panthers as one of his strong suits. When he signed with the Panthers, he was expected to play the role of mentor to Florida's young defensemen.

By being paired with 20-year-old Erik Gudbranson or Keaton Ellerby, Jovanovski has in many ways helped those two become better on both ends of the ice.

Back in the day, it was Florida defenseman Gord Murphy who took the young Jovanovski under his wing. Now Jovanovski is returning the favor as Murphy is an assistant coach in charge of Florida's defense.

“He's a true leader who gets it and has been around,'' Dineen said. “Those are things that come with years of experience. But he's backed it up with his play this year. He's given us all that we could have expected. I'm happy for him. He got to come back where it all started. There's renewed enthusiasm for him.''

And with the Panthers on the verge of advancing to the playoffs for the first time in more than a decade, Jovanovski sure is enjoying the ride in these familiar environs.

“It's nice, personally for me, playing somewhere where you are appreciated,'' said Jovanovski, who has played in 27 of Florida's 31 postseason games in franchise history. “We have loyal fans in South Florida and we're giving them something to cheer about. Getting to the postseason, and making some noise, is a goal of ours.''

Scottie Upshall perhaps the only free agent deals the Panthers haven't seen much return on this season because of injuries to the 28-year-old winger. Upshall played in just 17 games before being shutdown with sports hernia injury that required surgery. Upshall returned to the lineup Wednesday in Carolina and wants to help the Panthers down the stretch.

With Upshall missing so much time, if he can get back to form it's as if the Panthers made a late season trade. Upshall can score, as he had 22 goals in 81 games for Columbus and Phoenix last season. He has scored once for the Panthers. 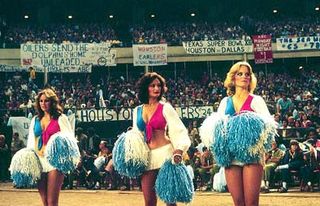 The game: This is the only meeting of the season between the two, with Edmonton winning the previous two meetings. Florida has not beaten Edmonton on home ice since 2002. The Panthers had their five-game winning streak halted Wednesday in Carolina; Edmonton, which played Tampa Bay on Thursday, had won three of four.