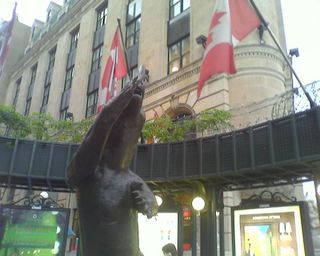 Whether he intended the pun or not, Panthers coach Kevin Dineen compared the slumping Bruins to a “wounded bear” before Thursday night's game in Sunrise.

Boston may be the defending Stanley Cup champions and may lead the Northeast Division, but they sure don't have much bite these days.

Florida added to the Bruins struggles by scoring three goals in the second period en route to an all important 6-2 win in front of a announced 19,004 at BankAtlantic Center. Florida has won the first three games of a homestand that concludes Saturday against the Sabres.

“There's satisfaction here. I'm a bit of a New England 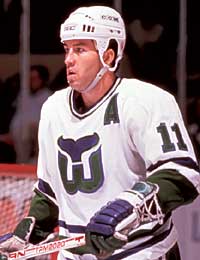 guy,'' said Panthers coach and former Hartford Whalers captain Kevin Dineen. “I always enjoy beating the gold-and-black. But most importantly is our team keeping a tempo and getting on a little roll.''

The Panthers, who lead the Southeast Division by three points over idle Washington, are just two points behind the Bruins for the second overall seed in the Eastern Conference. Both teams have 12 games left with the two splitting the four game season series. Boston has lost four straight and six of eight.

“We have to stop looking behind us,'' Stephen Weiss said, “and start looking at teams ahead of us.''

For the fourth straight game, the Panthers took a 1-0 lead after Mikael Samuelsson's wrist shot from 50 feet out beat Tim Thomas late in the opening period.

The two teams didn't do much in that first period but made up for it in a festive second. Florida made it 2-0 when Marcel Goc redirected Brian Campbell's shot from the blue line.

Boston cut the deficit on Joe Corvo's fourth of the year, but Weiss made it a two-goal affair once again after pouncing on a puck Thomas failed in kicking out to safety. 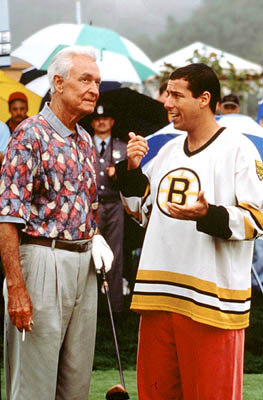 John Madden scored his first goal since joining the Panthers in January to make it 4-1 with 4:33 left in the second period, punching the glass in celebration.

“This is huge, these games are just crucial,'' said Madden, a three-time Stanley Cup champion with New Jersey (twice) and Chicago.

“All the games are big and we have to start building. Now is the time to start playing playoff hockey. We believe in ourselves and we're moving forward.''

Boston put up a fight in the third period when Brian Rolston got a power play goal 1:44 in, but the threat was short lived after Tomas Kopecky picked off a loose puck and drove in on Thomas to make it 5-2 with 12:09 remaining.

Wojtek Wolski capped things off by burying a feed from Tomas Fleischmann on a 2-on-1 rush with 2:36 left.

Florida, which has scored at least five goals in each of its past two games, goes for its first four game winning streak since 2008 on Saturday against a Sabres team that is back in the playoff race and currently sits ninth in the conference.

“This is awesome, a lot of fun. Those are the words that come to mind,'' Weiss said. “It's great to experience this with this group. We have guys who want to play for each other and guys are competing and wanting to be a part of this.''

Dineen is expected to have a number of new options available for Saturday's lineup as Kris Versteeg, Dmitry Kulikov and Scottie Upshall could all be ready to play. All three took part in Thursday's morning skate and at least two should play against the Sabres.

Once all three players return, Florida will have 24 players on the active roster – which is OK after the trade deadline. Teams can only carry 23 players before the deadline.

() Dineen all but confirmed Jack Skille's injured shoulder will all but end his season. Skille signed a two-year deal with the team last summer. “I don't think Jack is going to play again this season and I would be very surprised if he was,'' Dineen said. “Anything realistic is months away.''