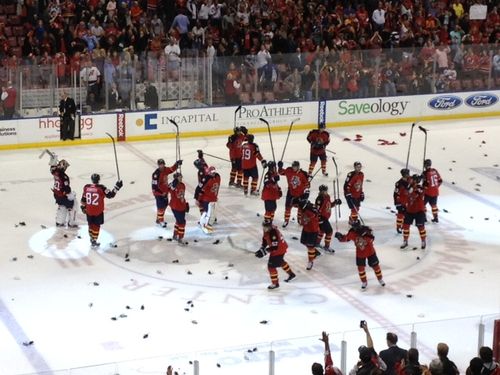 The Panthers have been pretty good at making history the past few days.

Sunday night, eight days after winning the franchise's first division title, Florida won its first postseason game in its 'new' arena by jumping out to a three goal lead before holding on to beat New Jersey 4-2 in the second game of its first-round game of the Stanley Cup playoffs.

Of course, as is the Panthers way, it didn't come easy. But yet, as hundreds of rats hit the ice from all reaches of BankAtlantic Center, it finally happened.

“It was worth the wait,'' a gap-toothed Stephen Weiss said. “That was fun.''

The gutsy win evened the best-of-7 series at one game each in front of an announced sellout of 19,248. Game 3 is Tuesday in Newark, N.J.

Florida had been 0-3 in playoff games at the National Car Rental/Office Depot/BankAtlantic Center with all of the losses coming to New Jersey. 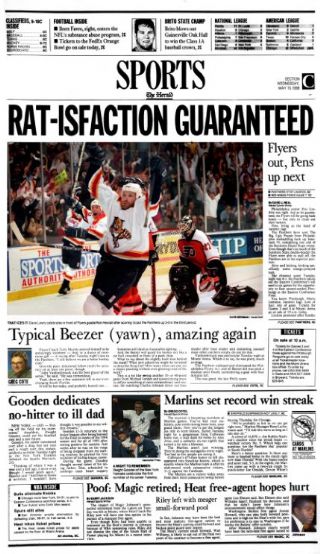 The Panthers were swept in four by the Devils in 2000 – their second season removed from the Miami Arena. Florida's last postseason victory came just 5,478 days before (or almost 15 years) when it beat the Rangers 3-0 on March 17, 1997, in Game 1 of that opening-round series. New York won the next four. 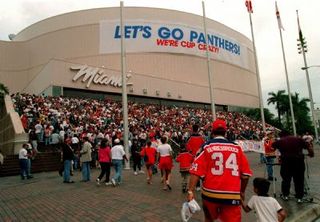 How long ago was that? Panthers defenseman Ed Jovanovski was in his second season with the team. Now, his playoff beard looks frosted in snow. The Panthers left Miami in 1998.

“It feels good to win no matter how long it has been for the organization,'' Jovanovski, 35, said. “It's a step in the right direction, where we want to be. We'll enjoy this one as a group for now, then it's on to Game 3.''

In Friday night's 3-2 loss to the Devils, the Panthers looked lost for too much of the first period as New Jersey took a 3-0 lead in the opening period before Florida bounced back. On Sunday it was a completely different story.

The Panthers drew a penalty just 11 seconds into the game when Andy Greene tripped up Marcel Goc as both rolled goalie Martin Brodeur. Weiss cashed in by scoring his first postseason goal – he had played 637 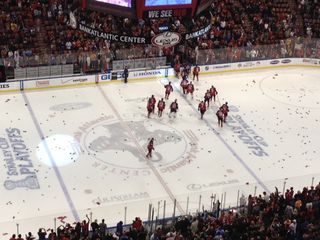 Weiss got his second goal of the game early in the second as the Panthers held a two-man advantage for a whole two minutes with David Clarkson and Alexei Ponikarovsky in the box for separate infractions.

Weiss – who had scored two power play goals once in his career and not since 2005 – jumped all over a rebound and beat Brodeur top shelf 1:12 into the period.

“You can't ask for a better start,'' Weiss said. “Things tightened in the third, but they're a good hockey club. We pushed hard but we finished them off. That was important.''

Goc got into the act himself late in the second period, firing a shot from 25 feet out that slipped past Mikael Samuelsson who was screening Brodeur. The puck also went past Brodeur and Florida had a 3-0 lead with 5:21 left, leading some Panthers fans to serenade Brodeur mockingly.

They should have held off on that one as things would soon get messy – and Brodeur turned back into, well, Martin Brodeur.

As usual, the Panthers “took the dirt path,'' as coach Kevin Dineen has said all year to victory. The Devils pounced on the Panthers in the third period, picking up two quick goals, making it a 3-2 game just over two minutes in.

Only the Panthers scratched and clawed and held off the hard-charging Devils as Theodore stopped 10 shots in the third. Florida faced an extra skater as Brodeur was pulled with 1:15 left and had a key faceoff after a Kris Versteeg icing with 7.6 seconds left. Tomas Fleischmann's shot sank into the empty net just as the final horn went off. 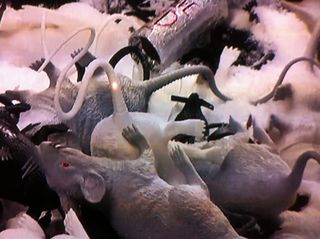 Then came the rats.

“They kept coming but we didn't panic,'' Theodore said. “That's what the playoffs are all about.''