Florida Panthers Headed Back to the Sunshine State Even with Devils after 4-0 Loss ... Martin Brodeur Sets Postseason Record with 24th Shutout 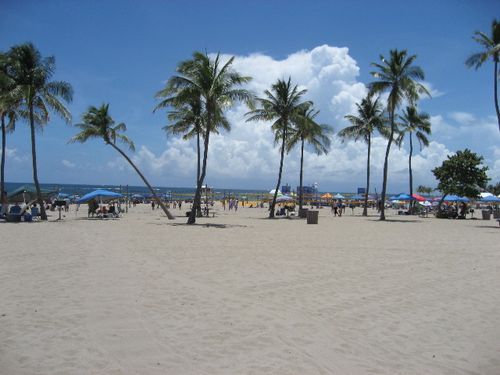 They wouldn't need them anyway.

The Devils broke open a close game by erupting for three goals on four shots early in the final period to rout the Panthers 4-0.

New Jersey's win tied the best-of-7 series at two each and assured a return trip to Newark for Florida next week. Game 5 is Saturday at BankAtlantic Center in Sunrise with Game 6 scheduled for Tuesday.

The Panthers are now in a best-of-3 series with two games at home.

“It would have been nice to get a couple goals early, but we're going home with two of three at home. We're in good shape,'' Stephen Weiss said. “That's a good club and they were desperate.''

Martin Broduer, who was pulled when Florida came back with three straight goals on Tuesday, was as sharp as ever and stopped all 26 shots to earn his 24th postseason shutout. Broduer now holds the NHL record for postseason shutouts, passing Montreal/Colorado great Patrick Roy.

“We knew they would be a very hungry team and they proved that,'' said Scott Clemmensen, who gave up four goals on 27 shots in his first postseason start. “You knew Marty would have a bounce-back game. There would be no easy goals. They needed to be desperate and they were. They didn't want to go down 3-1. It's anyone's series. It's been a tight series.''

Before the game, coach Kevin Dineen “guaranteed” that if his team fell behind 3-0 again – it had happened twice before in the series – they would not recover. Right he was. Florida gave up its first goal in the second period before the Devils took their third 3-0 lead of the series in the third period.

Soon afterward, New Jersey made it 4-0 and the Panthers were done.

Florida's power play came into the night as hot as it could be with the Panthers going 3-for-3 with the advantage in Tuesday's victory. The Panthers power play looked very good at times on Thursday yet Florida couldn't put anything past the 39-year-old Brodeur.

The Panthers went 0-for-6 with the extra skater on Thursday and are now 6-for-16 in the four games this series.

Florida had a great scoring chance on the power play in the first when an Ed Jovanovski shot hit Sean Bergenheim in front of the net. His shot went wide and was loose, only no Florida player was there to knock it through.

“We had lots of chances out there,'' Dineen said. “In all honesty we weren't very accurate. I think we wanted to create off rebounds instead of trying to score off the shot. That's not a good recipe for us against a goalie like that.''

After going through the first scoreless opening period of the series, the Panthers finally surrendered a goal when Keaton Ellerby – filling in for an injured Jason Garrison – went to the box for high-sticking 4:38 into the second. With 30 seconds left in the power play, Marek Zidlicky's long shot clipped both Travis Zajac and Zach Parise past Clemmensen.

The score stayed 1-0 going into the third, but it wouldn't stay that was for long. New Jersey made it 2-0 when Steve Bernier – who spent a forgettable season in Sunrise last year – one-timed a loose puck off the skate of teammate Stephen Gionta and past Clemmensen.

The Devils made it 3-0 on Zajac's long shot from the slot 90 seconds later than closed things out when Ilya Kovalchuk zipped one from the left side with 11:28 remaining.

“It got away from us in the third and that really started in the second,'' Dineen said. “We didn't seem to have the desperation they did. It was a one-goal game so it's a doable game especially the way we've played this year. But we were out of sorts in the third and couldn't get our offensive game going. We were on the receiving end and didn't have many answers.''

The physical nature of the game intensified in the final few minutes of the game. Although it was nothing compared to the Philadelphia-Pittsburgh series, there were some shots coming from both sides.

With 4:09 left, Florida's Jerred Smithson went to the box for hitting Alexei Ponikarovsky in the back after he put a stick into Brian Campbell's face. Later, both Marco Sturm and Bernier got into it. David Clarkson left the game with 21 seconds left on a game misconduct.

“We respect those guys and they respect us,'' Kopecky said. “But we're both going to do whatever it takes to win. You have to keep your composure for the whole 60 minutes.''