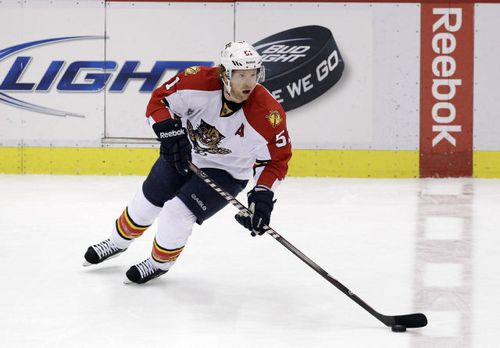 No defenseman has won the Lady Byng Memorial Trophy – which honors the NHL players for sportsmanship and gentlemanly play – since the 1950s.

Brian Campbell is hoping to buck that trend.

Campbell was announced as one of three finalists for the award which is voted on by the Professional Hockey Writers Association on Monday.

Campbell is considered a strong candidate to become the first defenseman – and only the third ever – since Red Kelly in 1954 to win.

Matt Moulson of the Islanders and Edmonton's Jordan Eberle are the other finalists.

The winner will be announced on June 20 at the NHL awards show held in Las Vegas.

“It's obviously a great honor. Not many defensemen get it and I don't know why,'' Campbell said before the Panthers flew to Newark, N.J., for Game 6 of their best-of-seven series against the Devils.

“You look at some of the things going on in the playoffs. This game can be played hard and played the right way. It's good to see guys play hard and it's starting to clear up in the playoffs.''

Campbell averaged 26:53 per game this season and was one of three (Mike Weaver, Tomas Fleischmann) to appear in all 82 regular season games for the Panthers this season.

Of the 2,354 shifts Campbell skated in during the regular season, he was flagged just three times. Once for delay of game when he shot the puck into the stands.

“I took one dumb one and that's the one I remember,'' he said.

Of the top 30 defensemen in the league per time on ice, only Campbell logged fewer than 20 penalty minutes.

“He had a fabulous year,'' Panthers coach Kevin Dineen said. “It's nice to be recognized as one of the elites in the league no matter the category. I don't know if that's the last announcement we hear about Brian Campbell.

"He was such a go-to gut for us. He plays the game with skill and character and a lot of heart. That adds up to someone very worthy of the Lady Byng.''

--Six months ago Sunday, the Panthers traded David Booth to Vancouver in exchange for Mikael Samuelsson and Marco Sturm.

On Sunday night, the Canucks – this year's President Trophy winner and the reigning Western Conference champions – were knocked out of the playoffs as eighth-seeded Los Angeles won the series 4-1.

Who would have thought Samuelsson and Sturm would be playing longer than Booth and the rest of the 'Florida' Canucks?

“They were the No. 1 team in the league but it is so close these days,'' Samuelsson said. “It doesn't matter if you are the top seed or the eighth, anyone can beat anyone. That's not the only example but it's a perfect example.

"You thought the Senators would have a chance against the Rangers? It's great competition.''

--Defenseman Jason Garrison missed Monday's practice but Dineen said he would be on the trip to New Jersey and could skate – and possibly play – on Tuesday.

Garrison has missed the past two games with a lower body injury.

Keaton Ellerby, who was knocked out of Game 4, returned to practice.