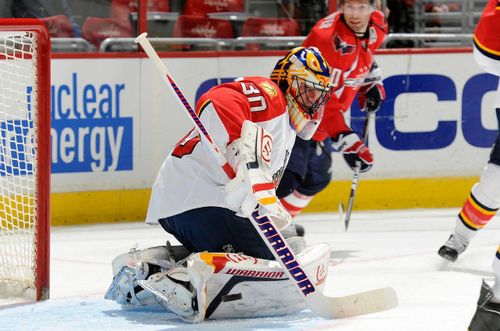 NEWARK, N.J. – Scott Clemmensen spent seven years with the Devils organization, yet with Hall of Famer Martin Brodeur in front of him, he never got to start a playoff game in New Jersey.

That all changed on Thursday as Clemmensen was in net – against his old mentor – when the Panthers took on the Devils in Game 4 of their best-of-7 opening round series.

"I'll be ready,'' Clemmensen said before the game. “I'm 34-year-old and getting my first start in the playoffs. I've felt very much a part of this team all year long. I've played pretty much regularly all year long.

“As I've said, I expected to play some and contribute regardless if it was getting thrown into a game or starting a game. For me it's just about going out there and playing my game. It's the playoffs and things are going to get amped up a little bit.''

Clemmensen took over for starter Jose Theodore on Tuesday after Florida's starter gave up three goals on six shots.

Although coach Kevin Dineen said he didn't blame Theodore for the goals, Clemmensen's strong play – as well as some sloppy penalties by the Devils – helped keep the Panthers in the game. Florida rallied from a 3-0 deficit to win 4-3 and take a 2-1 lead in the series.

It's obvious Clemmensen earned his start.

"I think both teams have learned in this series that momentum swings can be dramatic,'' said Clemmensen, who gave up five goals in his five games heading into Thursday. “If you have a three-goal lead or you're down by three goals you have to keep playing. I think both teams realize the importance of that. We happened to come out on top in two of the three games but it's still anyone's series."

-- Defenseman Jason Garrison was a late healthy scratch with what Dineen said was "two" lower body problems. Garrison is said to be day-to-day.

Garrison took part in the morning skate with Keaton Ellerby – in the lineup for the first time since March 15 – was sent out for extra practice time with the rest of the healthy scratches.

Ellerby wasn't told until just before the game that he would be playing.

Ellerby left the game in the second period when he was rammed into the Devils bench where the open door met the stanchion. Ellerby looked to be in severe pain and has a lower body injury.

Tomas Fleischmann missed the morning skate but was back on the top line Tuesday night.

Wojtek Wolski filled in for Fleischmann but was a healthy scratch for the second straight night. Mike Santorelli and Krys Barch were the other players held out.

() Dineen criticized the soupy ice after Tuesday's morning skate and said even though it was better later that night – it really couldn't have been worse – it wasn't the best of conditions saying players from both sides were tripping and falling.

The ice was much improved on Thursday as it was much cooler Wednesday and Thursday; the area had a couple of days earlier in the week in which the temperature came close to 90.

Devils coach Pete DeBoer had nothing bad to say about the ice at BankAtlantic Center when asked Tuesday saying he was still friends with the guys who make the ice there.

“I felt bad about [my comments] the other day but that's one of those situations where you get caught off guard," Dineen said. "There are always people who work hard behind the scenes. "We're used to 80-degree weather in Florida. A couple days ago it was 80 degrees here, so I think there was some management there.

“The joke [in South Florida] is girls love coming to our games because that's when they get to wear their sweaters. It's so chilly in that rink. .-.-. I'm sure it will be tinkered with. A quality place like this wants to put on the best product. It's a fabulous building."

() The Panthers announced they have sold out single game tickets for the lower bowl and club level seating for Game 5 on Saturday.

Only a limited amount remain for those who purchase season tickets for the 2012-13 season. The Panthers also said they are close to selling out upper deck tickets as well.