« Where the Rat Was Won: The Origin of the Florida Panthers and their Rodents | Main | Thursday's Game 4 Notebook: #FlaPanthers Going with Scott Clemmensen ... Wolski Still Out » 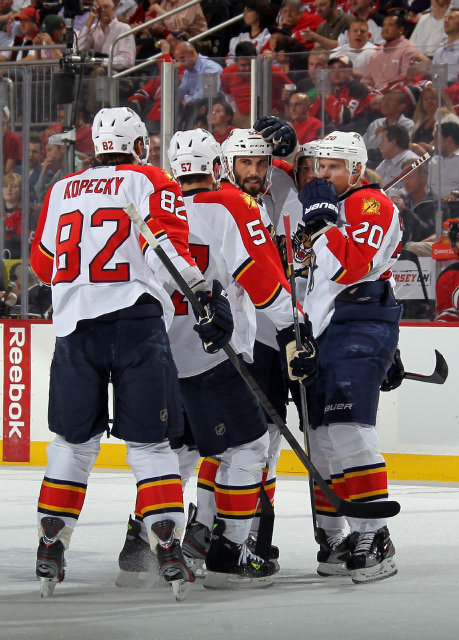 NEWARK, N.J. – Kevin Dineen had a pretty novel approach when asked where his team's focus would be now that it was up a game in its opening round playoff series.

“You can take whatever comments you got from [Devils coach] Pete DeBoer and put my name on them,'' he said, referring to the Devils holding an initial lead in the series.

“They got the first one and wanted the second. That's what we want to do. I just want to get through the first three minutes of the game before I worry about the outcome of the game.''

Although it's been a long time, the Panthers aren't exactly in uncharted waters by leading the Devils 2-1 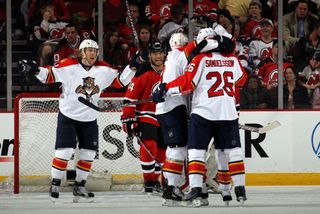 in their best-of-7 series. Teams do it all the time.

The Panthers rousing 4-3 win on Tuesday – Florida's first road playoff win since 1996 – has brought much excitement, but really, the Panthers haven't won anything yet.

“That's something to take pride in, we're putting some notches in our belts,'' Dineen said. “But these are baby steps, lets not kid ourselves.''

The Panthers play Game 4 against the host Devils on Thursday at 7 p.m. (FS Florida). A win and Florida comes home with a commanding lead in the series.

It's a tremendous opportunity for the Panthers to take control of things with a home date on Saturday.

“This is huge. Getting the first one on the road really sets us up for Thursday,'' center Stephen Weiss said Wednesday afternoon. “We have to park Tuesday's win and forget about it. You can't forget how good that hockey club is. We were lucky to get that one after the start we had. We're moving on and want to come home with the lead.''

It's a real concern. In Friday's series opener, the Devils led 3-0 before the opening period had ended. On Tuesday, New Jersey's 3-0 lead came just over six minutes into the game.

Although all three games have seen a team go up 3-0 (Florida went into the third period in Sunday's Game 2 leading by that score), both teams know they need to tighten things up.

“Being down 3-0 twice is pretty irresponsible and it's not acceptable,'' Dineen said. “This is sports and we're big boys. We know we have to man up and be better in certain situations. The response factor has been good for the most part. It's a balancing act.''

Dineen, as usual, wouldn't tip his hand when it comes to whether Jose Theodore or Scott Clemmensen will start Thursday. Both Theodore and Jersey starter 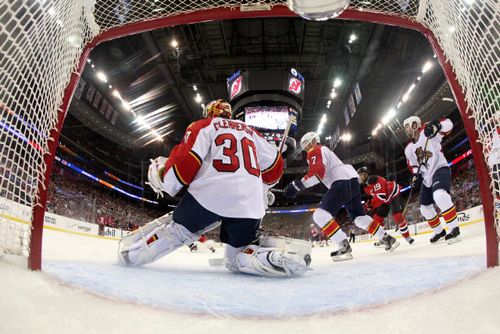 Martin Brodeur were replaced during Tuesday's game; Broduer will be back against the Panthers. It's likely that Clemmensen, who stopped all 19 shots faced, will go against his former mentor.

“For two months, Clemmensen has been an excellent goaltender perhaps one of the best in the league,'' Dineen said.

“What he does have is a tremendous amount of respect from his coaching staff and his teammates. You can tell from people here in Jersey that he's a hard guy to dislike. That fits his character. I have a tough decision to make. Whichever one I make I feel will be the right one.''

Clemmensen spent seven seasons with the Devils organization and knows it's a great story line if he plays against New Jersey. He says his focus is solely on the hockey.

“If it's me, I'll be ready to play,'' Clemmensen said. “It's an exciting time, it's the playoffs and it's my former team so there's some intrigue there. But it doesn't matter who we're playing. The playoffs are so much fun to be a part of.''

Dineen is confident Clemmensen will play hard for the Panthers when given the call as he has rarely let the team down this season.

“He never gets anything easy,'' Dineen said. “I think that's why he's had success. He's not flashy or hanging on Broadway. He goes out and earns his paycheck. He's a heck of a teammate.''

() The Panthers took Wednesday off and had a light workout near their hotel in Jersey City. The Panthers had ice reserved at the Devils' training facility at Prudential Center but didn't use it.

() Defenseman Mike Weaver was awarded the Panthers 'championship belt' after scoring the game-tying goal against the Devils on Tuesday.

The belt has been given to the player his peers' feel is most deserving of helping the team win. Weaver hadn't scored a goal this season before whipping a shot past Brodeur in the second period.

“He's not known for a cannonading drive,'' Dineen said. “That curved stick of his is made for defending. But you put pucks on net and good things happen. That was a great goal for us.''

() When told he was sitting in the same locker stall LeBron James used on Monday night when the Heat visited the Nets at Prudential Center, Theodore smiled. “We're tight like that,'' he said.

Up next: Game 5 on Saturday; BankAtlantic Center, 7 p.m.