« Devils to Have Newark to Themselves: 'New Jersey' Nets Moving to Brooklyn | Main | Where the Rat Was Won: The Origin of the Florida Panthers and their Rodents » 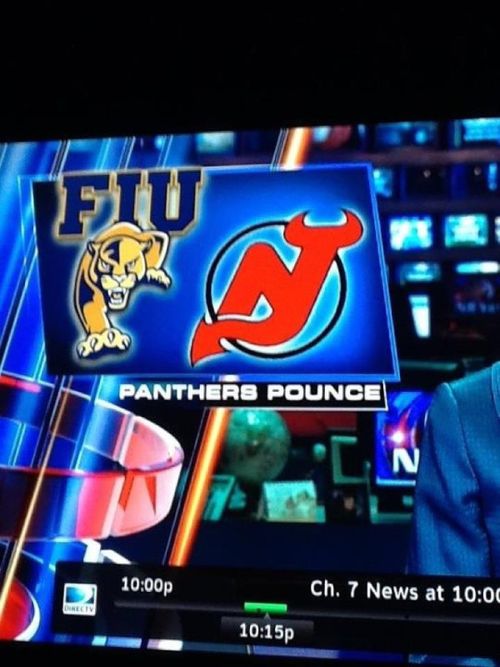 NEWARK, N.J. – A day before the Panthers first playoff series in over a decade began, Stephen Weiss swore his team wasn't just happy to be in the postseason.

The Panthers, Weiss said, were coming to create a little havok.

Tuesday night they did just that. The Panthers shocked the host Devils by roaring back from an early three-goal deficit to win 4-3 and take a 2-1 lead in a best-of-7 series that continues Thursday at Prudential Center.

Florida trailed 3-0 just six-plus minutes into the game but scored twice in the final four minutes of the period to take momentum into the locker room. Florida also trailed New Jersey 3-0 in Friday's series opener but fell a goal short of evening it up.

“That was a big goal,'' coach Kevin Dineen said of Jason Garrison's goal with 7.4 seconds left in the opening period which made it a 3-2 game.

“We were getting overwhelmed, getting outplayed. All of a sudden, we're walking in and we're down one on the road. That happens all the time. It was very easy to settle them down after that.''

The Panthers quieted a roucous sellout crowd, one that came to see their Devils take command of a series many hockey experts predicted would end quick.

Florida, after all, won just two of its final 10 games. The Devils rolled into the playoffs with six straight wins. None of that matters now.

“This is a great group of guys and their character is impecable,'' said GM Dale Tallon, whose team hadn't won a road playoff game since Game 7 of the 1996 Eastern Conference championship in Pittsburgh.

“They keep battling and never quit. That's been the story all year. I am so proud of these guys.''

Dineen has another goalie controversy going as Scott Clemmensen stopped all 19 shots he faced after replacing Jose Theodore after New Jersey scored those three quick goals. Clemmensen, now 5-0 against his former team, slammed the door on the Devils allowing the Panthers to make a big comeback.

Florida has only won three games in its history when trailing 3-0. Two came this season and both against the Devils.

“I thought things changed after we got the first goal,'' said Clemmensen, who got his first postseason win. “Our second goal at the end of the period was big obviously.''

Clemmensen held off the Devils and Sean Bergenheim charged in on Broduer for a power play goal at 16:11 of the first.

Then came Garrison's big bomb of a slap shot to give the Panthers true hope this game was winnable.

Florida came out charging in the second and got the game-tying goal from an unexpected place as Mike Weaver – who hadn't scored in 82 regular season games nor two postseason ones – made it a 3-3 game with a slick slap shot after pulling in a puck the Devils failed to clear.

Devils coach Pete DeBoer, trying to change his team's fate, did the unthinkable and put Brodeur on the bench during a playoff game. Clemmensen was the last goalie to replace Brodeur in a playoff game; former Thrashers goalie Johan Hedberg got the honors on Tuesday.

“This showed the character of our team,'' Weaver said. “We just can't keep on falling down big, however. We're going to enjoy this though, feel positive. But [Wednesday] we have to forget. You can't get to high. We're going to stay the course.''

The Panthers took their first and final lead of the night not long after with Brian Campbell whipping a shot past Hedberg 6:34 into the second. Florida's power play has been terrific this postseason as Campbell's goal made the Panthers 3-for-3 on the advantage on Tuesday as they have scored six of their nine goals in the series on the power play.

The Devils looked to tie it late in the second but Marek Zidlicky's goal was disallowed as Steve Bernier rolled into Clemmensen. No penalty was called, yet a few beer bottles flew from the crowd toward the officials.

“That's a good call, the goalie has to be able to move in the crease,'' Dineen said.

Theodore said you have to have a short memory and praised the play of Clemmensen.

“I'm going to see if I could do anything different,'' Theodore said. “I think they just came out hard and got clean goals. It's tough to leave 3-0. You just hope the team makes a comeback. To come back and win was huge.''

Said Dineen: “I have tremendous respect for Jose and it was extremely hard to pull him out. There are some interesting decisions to make in both coaches' rooms in the coming days. .-.-. I'm comfortable going either way.''