Stephen Weiss: Glad I Stuck it out with the Florida Panthers 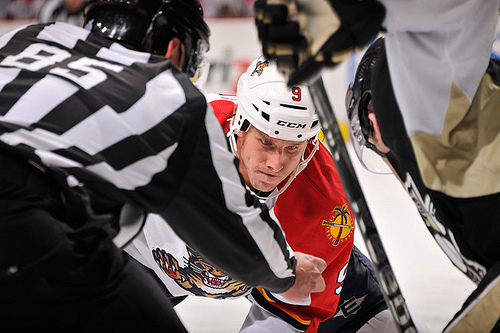 With the Panthers finally making the playoffs after all this time, much has been made about Stephen Weiss' dedication to the franchise.
Few would have blamed Weiss had he asked out of South Florida when given the chance, but he decided to stick it out with the team that drafted him at the 2001 draft held in Sunrise.
“It's been tough, a long 10 years. You wonder if you're doing the right thing,'' Weiss said.
“It was worth staying, trusting Dale [Tallon]. We have some young kids coming up who will be pretty special. I want to be a part of that. But it's been tough. You go home early in the summer and wonder if you're doing the right thing for yourself and your career.
"You want to be loyal by at the same time there's only so many years to play. And you want to be able to play for the Stanley Cup. I'm excited to get my first taste.''

Stephen spoke to the Kup and Goldie show (@KupAndGoldie) on Friday afternoon and spoke of the emotions running through him as it finally sunk in that he was going to the postseason.

Here are some excerpts of that conversation on WQAM-560:

When did the playoffs sink in: "When I was on the bus heading to the airport I got to speak to some people back home. They were pretty pumped. I'm just excited to get going.''

You and Goldie embraced? It's a big deal to make the playoffs. Have a 'this is cool' moment?: "Yeah, when Dale and Bill Torrey and everyone was waiting downstairs to congratulate us. I took a second to myself to reflect back ... When Dale came in, I was super confident in him, what he did in Chicago. From Day 1, I really liked and respected Dale and wanted to be here with him. You've seen what he's done.''

Low point over past 10 years?: "I think the low moment was last year around the trade deadline when we got rid of like seven veterans. It was a complete rebuild again. That was a tough moment But there have been a lot. But I never wanted to go anywhere else. At the same time, at the end of every season when it's still not working out, you wonder if you're doing the right thing. When I saw what Dale was doing this summer, bringing in all those guys -- I knew what kind of quality guys we had -- I was pumped.''

Does a win Saturday bring momentum?: "I hope so. We haven't played our best hockey down the stretch. The last couple of weeks, looking back, no doubt it was weighing on us. The pressure of the past 10 years and everyone wanting it so bad. We might have been squeezing the stick too much. We had it the other night against Winnipeg and it skated by us. That was tough. But we haven't done anything easy all year. It's a resilient group. We spoke before the road trip. You know what? We know we don't have any super stars. We have a lot of third and fourth line type guys who work hard. If we play to that identity, we're going to be fine.''

When did you realize you were in the playoffs?: "I was on the bench and it was during the TV timeout when Washington does the 'Unleash the Fury' toward the end of the game. That was going on and it was pretty cool. The place was pumped. Then all of a sudden it got even more loud. And I didn't realize why.

"Then Sean Bergenheim tapped me on the shoulder and pointed toward the scoreboard. They had a huge 'Philly 2, Buffalo 1 final' on the scoreboard. And I looked at Bergie and he said 'We're in.'

"I just put my hands on my head and, we're still down in the game and there are a few minutes left, but there were a lot of emotions going on.''