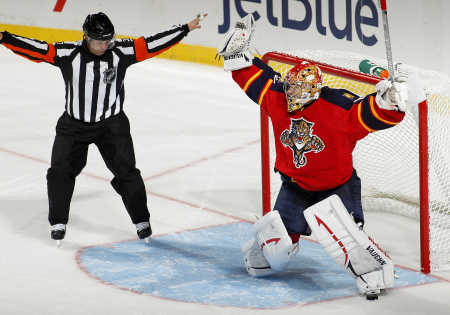 One of the final – and most lasting visuals – of the Panthers' season came when television cameras focused on the team's box atop the BankAtlantic Center in the seconds following Florida's double-overtime loss to the Devils last Friday morning.

There was general manager Dale Tallon with his face buried on the table. Team founder and alternate governor Bill Torrey was leaning back in his chair, his face covered by his hand.

The Panthers played a passionate style of game this past season as their management wore their feelings out in the open.

On Friday morning – after almost 84 minutes of hockey in the 89th game of the season – it all came to a close.

Tallon can't wait for the ride to begin anew.

“I get involved, get involved in every game,'' Tallon said in his wrap-up remarks to the local media on Tuesday morning.

“It was a series that the differential through seven games was one goal. That's tough to take. .-.-. It was disappointing but bittersweet. We had a great season but that was a tough one to lose. We'll use this as a motivator for next year. Our players realize how close they were and regret not scoring that goal to get us to the next series. We're not satisfied.''

With the season over, the Panthers brain trust now shifts their focus to the upcoming draft next month and the free agency period which opens July 1.
No one expects Tallon to be even a quarter as busy as he was last summer.

Tallon signed a number of new players when free agency opened as he completely remade the roster. Tallon also had the third overall pick in the draft, with Jonathan Huberdeau expected to make next season's team after being left to mature a bit more in the Canadian junior leagues.

This year, Tallon will tweak – not remake. The Panthers core group is in place, for the most part, with no coaching search underway and no roster to fill out.

“Familiarity is key,'' Stephen Weiss said, “and we haven't had that. The guys know what to expect, what is expected of us. We have the type of group in here that's not satisfied. I'm looking forward to next year and going above and beyond what we did this year.''

Tallon does have some decisions to make with players on his current roster. For instance, backup goalie Scott Clemmensen is an unrestricted free agent, as is defenseman Jason Garrison, Krys Barch, John Madden, Mikael Samuelsson and Wotjek Wolski.
First-line winger Kris Versteeg is a restricted free agent.

Tallon said getting Garrison and Versteeg back under contract is a priority.

“We want to keep the team together,'' Tallon said. “We're going to start talking to agents now and sign the guys we need to get signed. They want to be here and we want them here.''

With Tallon's leadership – he was the architect of the 2010 Stanley Cup champs in Chicago – the Panthers hope this becomes a destination point for free agents. Although the Panthers have money under the cap, Florida isn't expected to be in the running for big free agents such as New Jersey's Zach Parise or Nashville's Ryan Suter come July 1.

“We sent a message to everyone in the hockey world that this is the place to be,'' Tallon said. “Why wouldn't you want to be here? Our fans really came on in the playoffs, and were great all season long. .-.-. The message has been sent that this team means business. We're going to be a championship team eventually. This is a fun place to be. This is when it gets exciting.''

Said John Madden: "They changed the culture here. Florida's a great place to play. I never thought I'd say that sitting from the outside all those years in New Jersey.''

() Top Trio: The Panthers got plenty of performance from the top line of Stephen Weiss, Tomas Fleischmann and Kris Versteeg. The trio combined for 70 goals – or 36 percent of the team's total.

() Theo and Clemm: The Panthers rarely had to worry about their goaltending as Jose Theodore and Scott Clemmensen were strong all season. Rookie Jacob Markstrom also played well when called upon.

() Strong on D: Florida's defensive corps – led by team MVP Brian Campbell – were a strong suit throughout as only Ed Jovanovski and Dmitry Kulikov missed substantial time. Jason Garrison's 16 goals was third among all d-men.

() Shoot 'em Out: Florida had the most overtime/shootout loss points (18) of any team to make the playoffs since the end of the lockout in 2005.

() 5-on-5: The Panthers power play was much improved over last year's franchise-worst performance as the Cats were ranked seventh in the league with the advantage. But Florida's 5-on-5 play was weak as its ratio was 25th in the league.